It is fair to say that DriveClub stalled at start line but it has been fully functional for a while so perhaps it is time to forget about the issues and go for a drive.

With DriveClub, Evolution have tried a new aspect to social gaming. Rather than just racing against friends or strangers, DriveClub invites you to be part of a club. Whether you play online or offline, you can earn progression points towards your own ranking as well as that of your club. These social aspects are all voluntary and the anti-social among us can go it alone and not miss out on too much.

The single player mode consists of a series of race events grouped by a class category. There is no story or career as such, it is simply all about the racing. Naturally you start off in the lowest category with the slowest cars and you must earn the right to get the keys to the rockets on wheels. 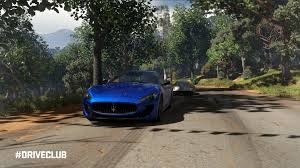 Race events consist of a single race or a group of races. Each race has 3 challenges to aim, each providing a star to prove you are worthy of moving up to the next category. As well as obtaining a certain finishing position, stars can based on actions such as hitting a certain speed during the race or finishing within a set time. These challenges add an extra layer to each race and create a further reason to revisit races you have already played rather than to just better a previous time.

Standard race events, time trials and drift events are all on offer. The first two speak for themselves but the drift events are actually a mixture of drift and speed. The track is broken into sections where you have a defined distance in which to drift or go as fast as possible and points are awarded accordingly. The races are both lap based and point to point.

After selecting a car you are presented with a first person view of the driver opening the car door and getting in. Evolution have clearly spent a lot of time on the car models and they want to show just how detailed they are outside and in. It is very impressive and a nice touch but one you may end up skipping after a while.

When the race starts it is obvious that DriveClub is a fine looking game. The environments are impressive, draw distances are long with no pop up and there are some nice visual effects from the accelerated day and night cycle. The lights of the cars at night can be dazzling and light up the road underneath whereas the setting sun can be blinding which isn’t ideal as you approach a hair pin bend. Weather was a recent addition and the pouring rain is particularly stunning. DriveClub is visually the most impressive driving game I have played and it also comes with a terrific sense of speed which adds to the thrill of racing, particularly when you reach the ‘real’ cars.

The handling model is similar to the likes of Project Gotham Racing in that it is a balance of simulation and arcade. It is closer to simulation but it is certainly not striving for complete realism like Gran Turismo.

Points are awarded during each race for actions such as overtaking, drifting, high speeds or drafting. In the early days the game was quite strict and points were deducted as quickly as they were awarded. The game will dock points for impact with other cars, impacts with the scenery or cutting corners. The game is a little more lenient now after player feedback which is for the best as getting rammed off the road by the AI and being punished for it was frustrating to say the least.

The tracks themselves are based on real locations although not based on actual roads or actual tracks. The locations are Canada, Chile, India, Norway and Scotland. I’ve only driven in one of those countries but the roads seem authentic enough to me, right down to the road signs (you’ll get docked points for taking a closer look at the signs as I learned). Setting the weather to heavy rain and driving in my home country seems just like the real thing, except for the car I’m driving and the speed I’m driving at. Japan has also been added to the locations in a recent update.

Car customisation, damage and interior cameras often come up when people talk about racing games. Those that like to tinker with their car setup are going to be disappointed as customisation options are limited to the paintwork. Cars do show damage after impacts but there are no parts flying off or bumpers dragging along the ground and car handling isn’t affected. The detail does go down to scrapes on the alloys which you will see plenty of on all of my cars. There is an interior camera and as with all interior viewpoints, it is very immersive, especially in the rain. Other features which racers may be used to like rewind features, racing lines and assists are nowhere to be seen but I can’t say I’ve missed them. 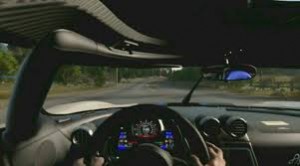 To liven things up during a race a variety of face off challenges will appear. This gives you the opportunity to beat the score of a friend or random person at tasks such as speed, drifting and keeping to the race line. It’s can be a little distracting but there is a great deal of satisfaction when it is a friend’s score you beat.

As well as face offs, there are challenges to create a further bit of competition. DriveClub maintains a list of your recent events and times and allows you to post them as a challenge for others to attempt. You can limit it to a chosen few or challenge the entire DriveClub community. Challenges are available for individuals or clubs. This is a similar setup to EA’s autolog and works very well.

The club element is an interesting idea. You can opt to go it alone, join a club or create your own club. Each club has a logo and colour scheme which can be applied to the cars. As you progress through the game you earn points for your single player ranking as well as your club ranking. A club can have a maximum of 6 members which keeps things even and prevents huge clubs rising above others. Being part of a club is a good concept but it seems a little undercooked and you wouldn’t really miss much going it alone.

There is an online multiplayer side as you would expect but as with all racers, it all depends on the mentality of those you are racing with. DriveClub is strict in its desire to have clean driving but some don’t and act like they are playing Burnout. In team based events you are just as likely to be rammed by a team member as you are by an opponent. When you get a good crowd then it plays much better.

It had a disaster of a beginning but DriveClub has proven itself to be a great racing game and deserves to be remembered as such. The racing is fast, the single player targets are challenging and it becomes a thrilling drive when you hit the faster cars. The club aspect I am unsold on but it doesn’t do any harm. To top it all off, it is a lovely looking game and I thoroughly enjoyed it.