Fantastic Beasts and Where to Find Them is the second story pack for LEGO Dimensions and brings J K Rowling’s magical world back to the game with the adventures of Newt Scamander.

The Story Packs bring a new 6 level self contained story to LEGO Dimensions and, as with the previous Ghostbusters set, this one is pretty much a replay of the Fantastic Beasts movie.  If you haven’t seen the movie yet then prepare for spoilers.  It does, however, give you a good few hours gameplay just from the story and that’s without factoring in the new items to collect, the extras to find and the new Battle Map that all Wave 2 figures provide.

Fantastic Beasts was already a great addition to the Harry Potter franchise, while going back in time to before Harry’s adventures and being set in America during the 20’s, it still managed to capture the magic (pun intended) of the series and builds on the great characters from J K Rowling’s books.  The game manages to port this across to the blocky LEGO world perfectly, with Eddie Redmayne’s voice and the original score adding to the authentic feel of the latest movie’s world rebuilt for Dimensions.

There are simple puzzles, somewhat watered down from the Year 1’s Starter Pack story, which add a few new elements to the game, including a section where moving the character to each space on the Portal can shrink or grow them to solve a puzzle.  The story and action sequences manage to entertain both young and old audiences, but it’s clear that the developers are going for a game that younger members of the family can play alongside their parents.

The 6 level size keeps this Story Pack entertaining throughout with no drops in pace.  Thankfully, you can revisit the New York City playset at any time at your own pace and hover up all the other collectables you might have missed the first time around.  There’s also a new Battle Arena which takes place in Newt’s case and looks quite gothic in nature.  It’s not the most featured Battle Arena to come out of Dimensions, though, despite the nice design of the fire-breathing gate decorations.

The LEGO Dimensions Fantastic Beasts and Where to Find Them Story Pack is another solid addition to the Dimensions franchise and one of the best stories yet.  The replayability and the beauty of the New York map make this a must have for those who own the Starter Pack and have even a passing interest in Rowling’s franchise.

LEGO Dimensions Fantastic Beasts and Where to Find Them Story Pack 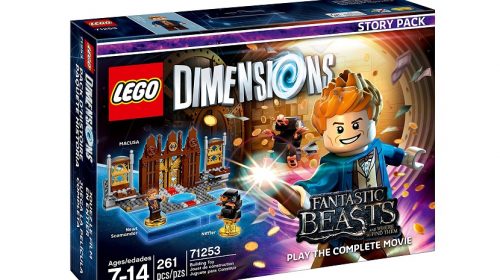