Given how crowded the Switch Vertical Shooter market is getting, it takes something special to stand out from the crowd. Alfa System’s Sisters Royale is banking on this sibling rivalry to do that.

As shooters go, the background story is certainly unique. Sisters Royale sees 5 sisters bickering with each other about a guy they’re all in love with, taking it to the battleground to settle the argument of who will be the one walking down the aisle with him. Yeah, it’s that kind of game!

The character models are great and the bickering is entertaining. Unfortunately, it turns out to be more entertaining than the game itself. While the menu options are pretty impressive, entering the game itself, you feel as if the budget went on the anime girls and there were just pennies left over for the in-game artists to do their work. It’s colourful and there are plenty of explosions and enemies, but it all feels a little dated when placed next to nearly any other shooter on Switch.

Gameplay is equally conflicted; the general sense of bullet-hell action feels good and has elements of the developers’ previous Castle of Shikigami series but control seems to be a little hampered by some slowdown or input lag (I couldn’t fathom which it was, but my actions weren’t being felt on screen as quickly at times).

The enemy and bullet patterns are fairly well thought out but a tad generic. The one thing that was interesting was the sword attack that the game gives you when enemies get too close. Simply spinning around on the spot will give you a close quarters attack to use, though I found it did need to be tempered with keeping an eye on enemy fire from the longer range attacks or facing another barrage of fire that I wasn’t ready for. Once I’d learned some of the game’s patterns, though, it came in more useful, separating out the near and far enemies with different attacks.

If you’ve exhausted all the other shooters on the eShop, Sisters Royale is still a solid title that will give you some entertainment, particularly if you find ultra-cute Anime girls fighting for a man your thing (it wasn’t for me) but the generic nature and dated graphics stand in the way of this being another classic of the genre. 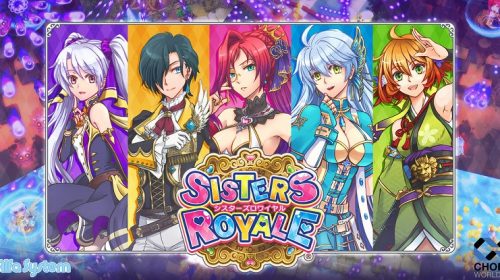