Firemint firmly stamped iPhone on the map as a games machine when they released Real Racing.  It was arguably the ultimate portable driving game.  So how, exactly, do you then go about bettering it? With a sequel that throws even more features and an even better looking game engine, it seems.

Real Racing 2 is a remarkable feat.  It takes all the perfect elements from Real Racing; the handling, physics and online racing and adds damage, licenced cars, more players in multiplayer and much more.

From the start, the game gives you real badged cars to play with, 30 in all.  It won’t let you drive off in a fast sports car straight away though. Starting with a tier of races that require the most basic of cars, further races require more and more powerful models as the Championship progresses. In addition, there are cups which limit this even further with criteria such as 6 cylinder engines or a particular top speed.

This system will be familiar to anyone who has played Gran Turismo and encourages the player to learn the basics first, in what turns out to be a much more realistic and unforgiving game than Real Racing was.  This is much nearer to the Gran Turismo or Forza series, providing all the realistic handling not found in the many arcade racers out there on the App Store.

But arcade drivers have nothing to fear from the learning curve here, you can set the assists to ensure the game helps you along and provides a much more arcade racing experience. With icons flashing up to tell you what assists you have on, it still feels as if the game pushes you nicely in to trying your hand at going pro and taking off each option, and rightly so.  With everything on it can feel as if the car guides you around the track at times, as you get used to the driving you can then turn off braking assists, steering assists and other guides one by one. 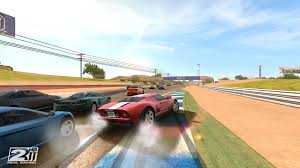 Even the quick race feels well padded out.  Completing races in Championship unlock them
in quick race.  A small set of options below the choice of track allow you to change the number of laps, difficulty and whether you’ll be racing against opponents.  While you won’t earn any points or money here, it’s a good way to hone those driving skills.

Likewise, the Time Trial lets you set fastest laps and earns Game Centre Achievements for the effort.  As your cars improve, so do the lap times, assuming you can handle the faster cars.

Car Customisation is restricted to colour rather than the sort of decals you see in games like Forza, but you can also customise your performance by buying parts.  This is sometimes more beneficial than spending a fortune on a more expensive car just so you can reach the criteria to enter a race and boosting your top speed may only be the cost of an engine enhancement.

Finally, Multiplayer lets you race locally or over the internet against up to 15 other players.  It’s quite a feat, though the strain does start to show on the 3GS while the iPhone 4 handles pretty much everything the game throws at it.    Unfortunately, the lobby doesn’t give you many options to configure the race, short of laps and voting for the track.  It would have been nice to have some limitations to the types of car allowed in a race in order to level the field a bit.  Too often I found myself up against cars that were much faster and those that were left behind in a trail of brake dust because they were underpowered.  What is there, though, is solid and provides access to some great online races.

Graphically, this game manages to improve on the already spectacular-looking Real Racing.  Even on 3GS the game looks the business, with plenty of roadside detail and a good draw distance.  But on Retina displays it outshines pretty much every other game available, it really has to be seen to be believed.  The only issue with this is that if you own a 3GS and see the iPhone 4 version you’re going to be green with envy, it really is that much of a difference.  With Gyroscopic controls supported as well, Real Racing 2 is certainly a game that shows off the best of the iPhone 4.

Real Racing 2 feels like it shouldn’t be able to fit in a device so small. Somehow Firemint have squashed every last feature they could think of into the tiny iPhone.   With only the Online features lagging behind (which will probably be updated in a patch), it’s hard to see what else could be improved.   In short, if there’s one game you need to get for the iPhone, it’s Real Racing 2.