File this one under “most wanted”, ASUS have announced the impending release of their limited edition GTX 980 Ti 20th Anniversary Gold Edition Graphics Card.

The card is based on the 980 Ti but it isn’t just the (rather lovely) gold colouring that sets it apart.  Clocked at 1367MHz, a good bit higher than reference 980 Ti cards – 21.6% higher in fact, that’s a huge performance increase in an already powerful card.

The card, code named GOLD20TH-GTX980-P-4GD5, features DirectCU II with 0dB Fan Technology, making it 15% cooler with an exclusive 10mm heatpipe that transports 40% more heat away from the GPU.

There’s also a new Memory Defroster for those who want to keep their card cool while overclocking. It’s a brand-new ASUS-exclusive technology that instantly defrosts your card’s memory during subzero overclocking to ensure sustained stability. 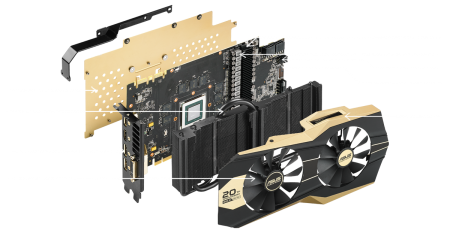 Also for overclockers who want to push their card further, there’s a new Safe Mode, where one tap of the Clear VBIOS button restores your graphics card’s default frequencies and voltages in an instant, avoiding serious lock-ups if you take the card a little too far.

8 + 8 pin PCIe power connectors are required and you’ll need to ensure that you have up to 375W additional power on your PSU load.

There’s even a handy indicator light on the front panel which shows the mode the card is in, with light, medium, heavy and safe mode indicated with different colours.

Price and exact release date are yet to be announced, but the GTX 980 Ti 20th Anniversary Gold Edition is due late November 2015 (so this or next week).