Just a day after the MyGeekBox crate winged its way through our front door, the first of January’s non-UK blocks appeared on the doorstep. 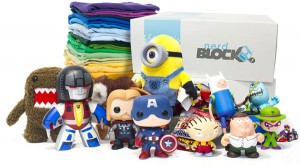 Nerd Block is another box filled with Geek-based goodness from Marvel and DC to Star Wars, Doctor Who and beyond.  The company also sells Horror Blocks, Arcade Blocks and 2 Jr boxes for girls and boys.  It’s a Canadian company so the blocks take a little longer to turn up and cost a little more due to postage (around £20 at the moment based on exchange rate), but having different boxes means that there is more chance of getting something specific to your needs.

January’s theme is A Galaxy Far Far Away, but while this immediately conjures ideas of space and particularly Star Trek, this has been stretched to include far more.

First up is the regular T-Shirt which, luckily for me, is a Doctor Who themed Tee featuring the Doctor’s trusty Sonic Screwdriver.  It’s a pretty distinctive design on a nice coloured Tee (beats the usual black or white ones we usually get). 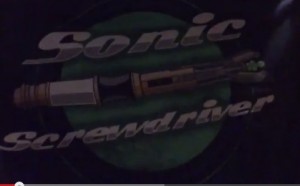 Secondly, we have a Grumpy Cat plush, which stretches the theme somewhat but is so cute we’ll let them off.  How a simple Meme got so big we’ll never know.

Next up is a weird one, Scatter Brains, sort of Nerf gun dart in the shape of a person with the exposed brain acting as the sticky head of the dart. Yes, really.

Another cool item is a Hobbit pen in the shape of Thorin’s Key and a 3D bookmark to go with it.  To go with that there are a pair of elf ears that you can either wear in the privacy of your own home and pretend to be Legolas or wear them out in public and confuse grannies.

Lastly, there’s a nice film cell from Empire Strikes Back, along with a certificate of authenticity and a dart board/decision maker to go with the Scatter Brains.

It’s another winner from Nerd Block as far as we’re concerned and next month’s promises to be just as good for collectors, with the theme being ‘Exclusives’

Watch the full unboxing video below.