Beat Saber may have sold thousands of Oculus Quest headsets but that doesn’t mean it has a monopoly on rhythm-based action VR games. Audica is here and it’s setting its sights on the top spot.

It’s fair to say Harmonix know a fair bit about music based games, having been successful with Frequency and then the massive Rockband franchise. Their first foray in to VR appeared on Oculus Rift last year and has since been ported to PSVR but now it finds a home on Oculus’ wireless VR headset. Audica shows continues their journey with a VR-centric take on the genre that manages to riff off both Beat Saber and their own games.

Forget light sticks, Audica is all about guns and shooting targets. This changes the dynamic somewhat for those used to Beat Saber’s slicing and dicing, though it does follow a similar pattern of working with the beat and the music gives you similar audio cues.

The basic targets arrive in a decreasing circle and need to be hit at the right time for maximum score, then you have those that require the trigger being held down, producing a lightning-style pulse which is held until the target disappears. Just to mix things up, another set of targets appear together or have a ‘tail’ which needs to be shot by slicing the laser gun along it. If that wasn’t enough, there are asteroids that hurtle toward you and need to be physically knocked out the way by the sides of your guns, too.

As you can imagine, this gets pretty hectic pretty quickly and even on the beginner mode keeping up can be a challenge in some of the faster paced songs. It never feels unfair, though, but it does feel more like a game of skill than Beat Saber, even on those easier levels, which fans of Rockband won’t be surprised to hear.

Audica manages to encompass Harmonix past and mix it with the a more modern twist thanks, in part, to the format of Virtual Reality, creating a fantastic rhythm action experience and a must have for Quest owners. 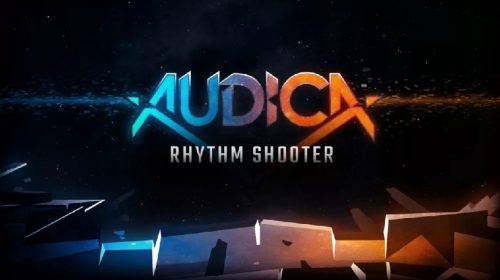