A sexy butt kicking witch on a family friendly Nintendo console, surely there is some mistake?

Once upon a time I won a download code for Bayonetta from the Playstation Blog. I downloaded the game immediately and then cruelly ignored it. I was always reluctant to play it since it isn’t really my kind of game. Many described the game as challenging which didn’t help matters. I’m not against a challenge from time to time but a challenge in a game which isn’t really a preferred style doesn’t really appeal. To top it all off, Bayonetta has been described as a spiritual sequel to Devil May Cry which is a game I didn’t like. So why have I written a review of this game? Despite all of my negative feelings I somehow got caught up in the hype of the Bayonetta and its sequel arriving on the Wii U.

Bayonetta is a third person action game. I prefer to think of it as a roaming beat-em-up since you roam around the environment, stopping to kick lumps out of everything that moves. Or at least attempt to; remember that comment about it being challenging?

The plot revolves around a war between witches and angels. It certainly isn’t the most gripping story line I have ever come across and I’ll admit that it didn’t hold my attention for long; by the end of the game I literally had no idea what was going on. This sounds like a criticism but it’s not at all; this game is all about the action and it is all so spectacular that you wouldn’t even notice the story if it wasn’t for the cut scenes.

For those that like to delve deeper into the story there are some collectibles to add to the lore. I read them at first; started skimming over them and then didn’t bother at all. Again, it really doesn’t matter but it is a worthy addition for those that care. 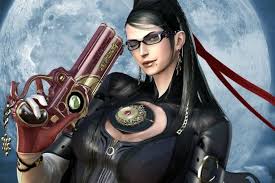 The combat control scheme is nice and simple. There is button to jump, a button to kick and button to punch. On the surface is seems very straightforward and it is but there is quite a depth to it. Bayonetta has a seemingly endless supply of moves at her disposal. I’m not keen on being swamped with moves to remember in fighting games. Street Fighter 2 is still my favourite of the series as each character only has few moves which meant it was easy to remember. These days it seems each character has hundreds of moves to learn and master. Bayonetta is no different in that sense but it does cater for the button masher like me. None of the moves involve things like quarter circle rotations of the analogue stick, it is all about the combination of button presses. Some moves require some directional input or a pause between presses but that is about as complicated as it gets. All of this means that I could hammer away on the buttons aimlessly and pull off all manner of moves and create the illusion that I know what I’m doing. The combat is fast, absolutely spectacular; it all moves impressively smoothly.

The loading screens act as a tutorial where all the moves are listed and you are free to practice. There is also an interesting counter by each move that shows just how many times you have used each of the moves. In my case, how I’ve managed to avoid using a lot of the moves in my button mashing frenzy.

To complement the offensive actions, there is a defensive dodge move. Dodging naturally avoids any loss of health but dodge at the last second and you are rewarded with Witch Time which slows everything down to a suitable pace for me. This presents the opportunity for a few hits and kicks without fear of a counter attack. It also comes with a risk.

Naturally Bayonetta has a range of special moves. She dual wields pistols and happens to have 2 sets; one for the hands and the other attached to her shoes. They are handy for some distance attacks but don’t do enough damage against the big boys. At times large stilettos or a large fist will appear out of a portal for some extra attack power. But there is no time to question where that came from as the prompt for a torture attack appears. These are exactly as they sound; Bayonetta conjures up a device to inflict a painful death upon an enemy. There is a nice variety of devices and always very effective. The highlight is the climax attacks where Bayonetta manages to transform her hair into a range of demonic creatures that rip the enemies apart. Like everything else, this is quite a spectacle.

The design of the enemies is very impressive. Each of them looks meticulously created with a lot of detail. And they are a strange looking bunch too. The smaller ones attack on numbers and the larger ones (and they come in extra-large variety at times) can be a one on one battle. Each type of enemy has its own attack style and they certainly don’t wait around for you to come at them. With the speed of the action and arms legs and arms swinging and weapons swinging about it can all become quite a blur to the newcomer and make it hard to spot an attack to dodge. Visually very impressive mind you.

The environments aren’t quite so impressive but there is a nice variety to them and there are moments where you stop to admire. In general, it did lack a bit of colour overall I felt.

Beating enemies and smashing up the environment rewards gold halos which are the in-game currency. New moves, items and weapons can all be bought and you are going to have to be pretty wealthy to grab the lot on a single play through.

It isn’t all fighting action. The game was originally published by Sega and there are some Sega references with a Super Hang On motorbike stage and a Space Harrier stage. Incase you miss the reference to Space Harrier, Bayonetta announces this is her “fantasy zone”. Whilst it is nice to break up the action, I personally found these sections went on for too long and became a bit tedious.

Bayonetta herself is an interesting character. She is a tall, slender and attractive woman. On first appearances she is not the sort of character you’d expect to like a fight nevermind be quite so brutal. She moves with grace and speed and packs quite a punch. And a kick. She is very self-confident and rather provocative. Players who have grown up on a diet of Nintendo characters like Daisy and Peach will never have come across a woman like this. Bayonetta struts around like a model on the cat walk and is perhaps a bit brazen at times but she also mocks those that find her antics sexy. It walks a fine line but manages to stay on the right side of parody and doesn’t just become a fantasy for the boys.

There are some new additions with the arrival on the Wii U. Touch screen controls have been added but I didn’t bother with them. What may interest Nintendo fans more is the costume changes. Bayonetta can sport Daisy, Peach, Samus and Link outfits. All I can say is that Daisy and Peach would be horrified at how short the outfits are. The Link outfit is certainly an acquired taste. 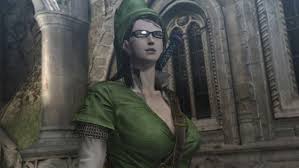 As I mentioned at the start, the game does come with a challenge. As much as button mashing is possible, players are really going to have to have more strategy than that. I started off playing on Normal difficulty but had to drop it down. Having completed the game I can safely say I’d have to really up my performance to be able to get close to reaching the end on Normal.

There are a few niggles in there. The camera can occasionally put itself in an awkward position but to be honest, it happens rarely and with so much going on and at such pace, I struggled to keep up so it is surprising there weren’t more camera issues. As I’ve already mentioned, the vehicle sections are tedious but my other grumble came towards the end when the last stages became a ‘best of’ show with numerous boss types appearing again. This felt a little like it was dragging the game out which it didn’t need

Despite being a few years old and this not being a remastered version, Bayonetta is still a spectacular game with some great combat and comes highly recommended even though it still isn’t my kind of game. Now onto the sequel.