Of all the ‘simulator’ games you could pick from, Bee Simulator is probably one of the least likely to appear on a ‘must have’ list, but it turns out this educational game is actually quite fun.

VarsavGame Studios and BIGBEN have produced a game that sees you take on the life of a worker honey bee, collecting pollen and avoiding all the pitfalls that come with the job, of which there are many.

The game aims to show players the life of a bee in a typical neighbourhood, one with fields and built up city areas, where there is plenty of pollen but also dangers from pesticides, pollution and natural enemies such as wasps. Thankfully, it doesn’t preach to its audience, it introduces each element with thought and fun instead.

Your first task is a tutorial, where a fellow bee takes you through collecting pollen, using your abilities (a dash move after collecting several of the same pollen types) plus using the rings and a special bee vision you can turn on to navigate for specific plants. Once you’ve done that you’re let loose on the world.

The world outside is pretty large and your hive is right next to a busy park with people standing around chatting. Finding another bee in trouble, you have to follow them in a race-style scenario, flying through hoops and trying to keep within a certain distance. miss hoops or fly too far from the other bee and you’ll find yourself back at the start. The issue with this is that the controls are super-sensitive, even on the lower settings. Flying through the hoops while avoiding obstacles like bikes, picnic baskets and spiders webs is a bit of a nightmare but the trick is to make sure you’ve charged up your speed increase before the race. It would have been much better, though, if the controls were fixed.

Other tasks see you take on wasps in a combat game where you’ll need to press the right buttons in order to win, a ‘Simon’ style dance that communicates information to other bees and general trips to find specific pollen types. Most of these are fairly simple, which makes the races even more infuriating considering that this game could be great for a younger audience.

The game is obviously made with a love for its source material and the voice acting is a nice touch, as are the various things you’ll learn about bees along the way. Graphically it’s really nice to look at if a little rough around the edges, with some animals and humans having a very limited movement in a short looped animation. The soundtrack is worth a mention, it’s well written and pleasant and never outstayed its welcome.

The issues with the game stem from difficulty, even on the easy setting the game is a little too hard for those players it aims to capture. It needs a very easy setting as a default for younger players to get the most out of the game. There is a co-op split screen mode which does help a little when playing with younger players, but the difficultly, or at least the timing of races really need to be sorted.

The main story isn’t that long, which may be why some of the tasks are harder, but there’s more busy work to do once it ends, so you could continue playing. It’s just that for a nearly full priced game it seems a little steep. As an indie game Bee Simulator’s charm and fun gameplay elements combined with the interesting facts about bees do make it worth playing for fans of our furry winged friends. 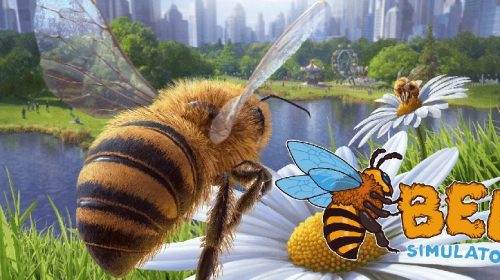