Clever title aside, Bubble Bobble 4 Friends is a very welcome return of an arcade classic franchise on Switch. Those two cute dinos Bub and Bob are back with a whole new adventure.

With a lovely animated intro we’re taking in to a kids bedroom complete with toys across the floor and brightly coloured shelves.  The setting forms the basis of each set of levels, opening as you complete the last set.  The game’s intro also shows us a Bub toy and villain Bonner toy come to life, with our plush dino hero being whisked away into the game. It’s a well thought out scenario that sets the basis for the game but it’s also definitely a shoe horn in to the reason for this new set of levels. 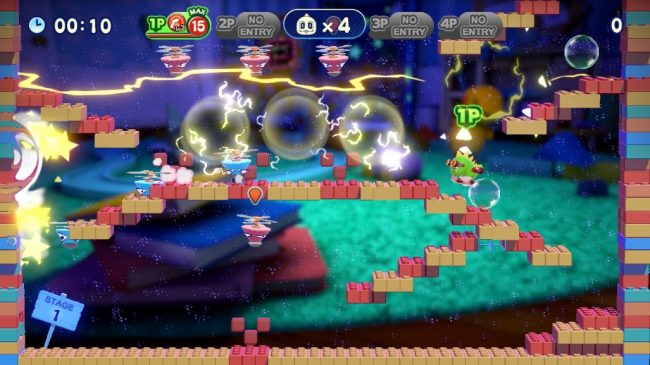 The game itself feels like it was made by fans of the series, unsurprisingly with Taito (now owned by Square Enix) overseeing things, and follows pretty much the same path as the original game all those years ago.  Every level takes place on a static screen full of blocks and enemies and you’ll need to blow bubbles to trap them and defeat them in order to move on to the next.  Simple coin-op stuff, then, but it still works beautifully.  The addition of power-ups, unlocked by completing the word EXTEND by collecting letters in each level, to help you in more hectic levels are welcome with bubble distance, speed and invulnerability each available to use for a set time during a level once unlocked and chosen.   You’ll need them if you want to aim for completing all levels with the full three stars, offering some replay value to the game.

There’s now a 4-player co-op mode (hence the 4 Friends title) which can get a little hectic but is a great idea and works well on Switch if you have 4 Joycons handy.  It’s interesting playing with younger players to help them out in this mode.

The graphical update manages to produce some beautiful looking levels while staying true to the vision of the original arcade machine.  Bosses are well designed and make the boss battle levels fun to watch as well as to play.  Some of the newer ‘crawl to get through the small gap’ elements felt a little unnecessary but have been added to make it harder to get all the fruit dropped at the end of a level and gain that elusive 3 star rating. 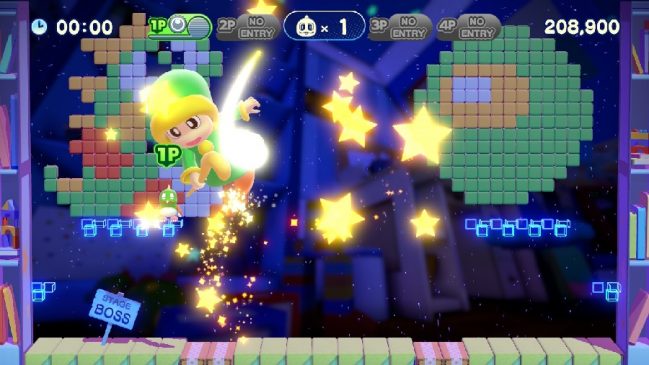 The inclusion of the full 1986 arcade original is a nice touch and will have fans reminiscing about arcade games from days gone by.  It holds up pretty well today, too, which only reinforces why the developers didn’t want to mess with the formula for the new game.

With 100 levels (half of these being harder versions of the first 50), the a 4-player co-op mode and the 3 star system this should keep fans coming back for more, but sadly Taito haven’t seen fit to include any online scoreboard to the game, which would have been fairly easy to implement and would have given players something else to replay levels for.  It’s one omission that I feel would have really pushed this game to an essential purchase.  As it is, any fan of the original or the series should still pick this latest game up. 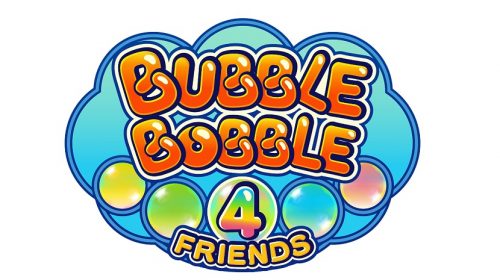