Many games look to the past to find inspiration, BurgerTime Party! brings it kicking and screaming with them in this twist on an arcade classic.

There’s no denying the source material for this game. Data East’s 1982 game has actually been available itself on the Switch for a while and developer Marvelous Europe are obviously big fans of the game, big enough to bring it back in this new re-imagining, anyway.

The basic premise remains the same; Playing as Chef Peter Pepper, your sole job is to make burgers.  Unfortunately, some of the food has ‘turned bad’ quite literally, it seems, and has come after you, disrupting your work.  What a pickle! 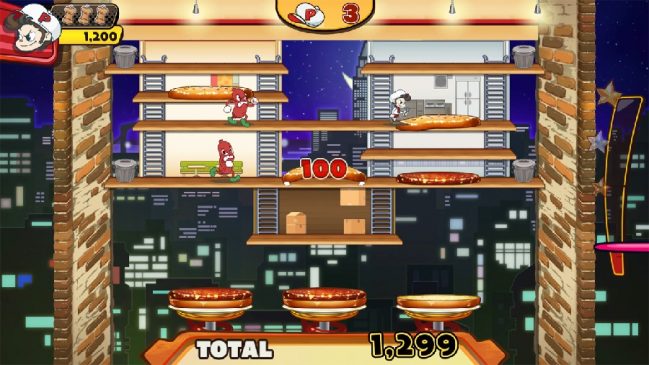 The game tasks you with making burgers piece by piece by walking or running over the top of each ingredient until it drops to the next level down.  If it drops on another piece of food then that falls, too, making it easy to rack up bonus points with multiple food items stacked up together.  The bad food gang will try to stop you in your burger-making tracks and they all have different methods, so you’ll need to learn these to take advantage of them.

The main way to remove the bad food is to trap them, either under the food dropping down or by getting them to follow you along a piece of food that you’re about to drop.    You also have some handy pepper which can stop them in their tracks, allowing you to place them in just the right spot for a food drop.

It’s a fairly simple concept that means you’ll be up and playing in no time but complicated level design, including the addition of things like icy floors, conveyor belts and more, mean there’s a certain element of strategy to racking up as many points as you can.  As an arcade game at heart, points are the main focus and although you can continue to the next level on a small amount of points, you’ll be aiming for more as you replay levels.

A co-op mode for up to 4 people makes things a little more frantic, you’ll be running around all over the place trying to make burgers while avoiding the enemies, but I love the newest mode, Battle Burger, where you can choose to play as the food, chasing one of the players around instead.  It’s a nice touch that plays fairly similar but the twist is enough to make its inclusion welcome. 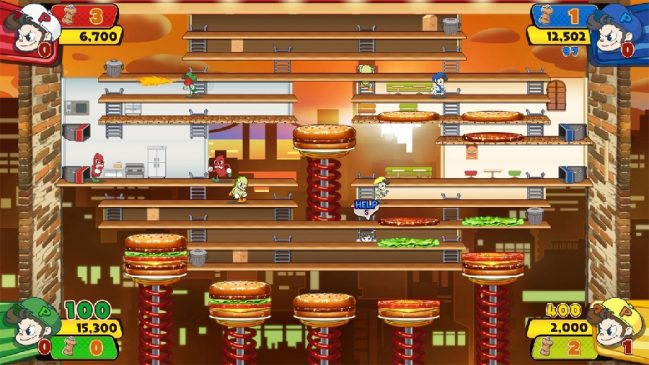 One thing that is missing is a retro graphics filter.  I would have loved to be able to play this game with the original Burger Time graphics. The new visuals are great, don’t get me wrong, they have so much expression and feel like an old classic cartoon, but retro would be great.

There’s loads to keep you busy, though, including levels inspired by the original games in Challenge Burger.  This unlocks after you’ve played through a few of the solo levels and tracks your score against an online score table, giving you a reason to go back and get a better score.  Unfortunately, that’s as far as online goes, with no option to play with or against friends online.  I would have loved to see that in Battle Burger. 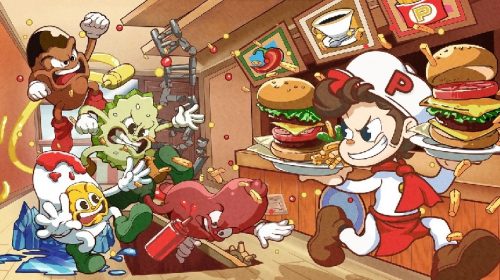