Were you nervous? I was. Call of Duty has been such a strong franchise for a number of years now despite, in my opinion, its slight yet steady dilution in more recent times. So how would the new kid on the block cope with the pressure? Would they deliver the same old same old or give us something new? Would they play it safe or take some risks?

I must admit that in the summer months of 2014 Advance Warfare wasn’t even on my radar. Then Activision started releasing teaser trailers and I started to take notice. By November I couldn’t wait to play it, and thankfully it didn’t disappoint. What Sledgehammer had managed to do was give us a CoD game that was robust, polished and above all else… FUN!!

Alright then, so Sledgehammer weren’t exactly new to Call of Duty. The had stepped in to help Infinity Ward out with Modern Warfare 3 when all that shenanigans was going on with West and Zampella (the guys behind Titanfall). MW3 was ok but nothing special. It showed us that Sledgehammer could make a CoD game, but questions still remained about if they could make a good one on their own. 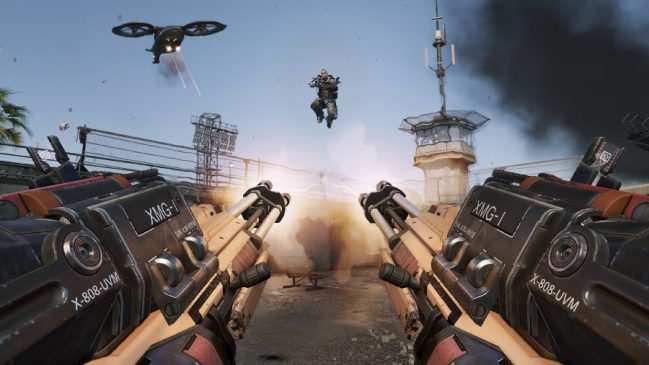 The short answer to that is ‘Yes’. However more importantly Advanced Warfare feels like it has given the franchise a much needed adrenaline shot it has been missing for a while. The past few years have felt like the development teams were struggling to come up with new ideas, releasing pretty much the same game every year with a few tweaks here and there to keep the punters happy. The same is definitely not true with Sledghammer.

Now before I get too carried away let’s get a few things straight. This game is not radically different from all the other CoD games. In its heart Advanced Warfare is still the same game. The campaign still plays second fiddle to multiplayer, and the core elements of both are largely unchanged. Essentially it is still just another Call of Duty pew pew. However…

The single player didn’t just feel like a bolt on this time, which was refreshing. The storyline is ridiculous as it is predictable but for whatever reason that doesn’t seem to matter. I would liken it to watching a Michael Bay film; technically proficient, high action and just a lot of fun. Does it expose the horrors and futility of war? No, but then it doesn’t need to try.

Instead what you get is an amusing mixture of story, some run of the mill shoots outs but also the occasional bit that plants that smile firmly back on your face. Don’t worry about falling off a precipice as there will always be an outstretched hand to save you. And the level that had me grappling around like Batman was unadulterated bliss.

But it’s the multiplayer that will keep people coming back for more, and this is where Advanced Warfare plays its trump card: The Exoskeleton. To those who don’t know by now it’s basically a harness the player wears which gives them new abilities, the main one being a ‘double jump’ which allows them to get to high places quickly. It’s a bit like Halo, but not exactly the same.

Whilst this might not sound revolutionary it is a big step for Call of Duty. Multiplayer has always been about running around in tight spaces, and is something that has remained unchanged for the last seven years at least. But this opens things up a bit, giving it a new element. There are still the corridors and tight spaces, however the open spaces are a lot more open than they’ve ever been before.

The exoskeleton isn’t just about pole vaulting without a pole though. It comes with a raft of customizable extras (temporary stamina boost, an invisibility cloak and others) as well as the ability to do directional boosts to help avoid gunfire. In skilled hands (not mine, I hasten to add) the exoskeleton can be a powerful tool. In short, it’s freaking awesome.

The maps were a little disappointing though. They are still good Call of Duty maps, and you do get a healthy mix of map styles with the game itself. I just felt that they failed to fully exploit the functionality the exoskeleton gives you. Once I had got used to the jumping around I quickly felt stifled and somewhat let down with how far up the maps went.

There is so much potential with Advanced Warfare in terms of making the multiplayer more vertical that I felt Sledgehammer could have done more to explore this area. Perhaps they did and decided it didn’t work. Or perhaps this is something that we’ll get in the DLC. I guess only time will tell if this prospect is delivered to us in the future.

That aside the online component is still top notch. The customisation still offers players the opportunity to tweak their layouts so suit their playing style. The Black Ops 2 custom slots have returned but have increased from 10 to 13, It’s a good system in my opinion; one that forces you into making concessions for your playing preferences.

The Score-streak is back (again, a good move) with players earning bonuses for things other than just killing. The weapons have also been tweaked although it works out just the same in the end: find a weapon that suits you and stick with it. Quick-scoping and dual-wielding are also to be found, which is great for those who can do it but bad news for those of us who can’t!!

Overall what Sledgehammer has given us is with Advanced Warfare a superb package. It takes the staple offering of Call of Duty and adds to it with a good mixture of fun and flair. Yes I did feel that the multiplayer could have offered more as it has so much potential, however this should not take anything away from the fact that AW has very much given the CoD series the definite lift it has needed for some time.