The second major Conan game to appear in recent years, Conan Unconquered takes the wave defence ideas from There Are Billions and builds on it, quite literally.

The foundations for the game are pretty solid; setting this in the Conan universe means there are already a ton of monsters, characters and settings they can use.  The base building is easy to learn and parts are given out bit by bit with a tutorial guiding initial stages but it’s pretty much business as usual if you’ve ever played a city builder; wood and stone are essential, so lumber yards and quarries are built and then the raw materials can be used for other buildings like barracks and defences.

It’s surprising that the Conan name hasn’t spawned a story mode here.  The encounters are random and there’s no over-riding narrative to speak of which seems, to me, like a missed opportunity.   The random fights mean that the player can eek out a lot of replay-ability but it does feel like an endless mode that should have really been a second option rather than the main mode.

There are other issues within the game, particularly some of the ways you interact with the parts you’ve built.  One of the biggest issues I have is with putting out fires, which is a laborious task made worse by the fiddly nature of having to choose a small section of wall to put out before moving on to the next, all while the enemy attacks.

On the positive side, the larger creatures you find through searching the dessert and the large enemy monsters you face off against are well designed and provide a great battle.  When everything gels together it really works, it’s just unfortunate that it doesn’t work all the time.

If you like real-time defence games and you love the Conan universe you’ll probably be able to ignore the mis-steps here to enjoy the game underneath, but there’s always that feeling niggling away that this game could have been vastly improved with a few changes. 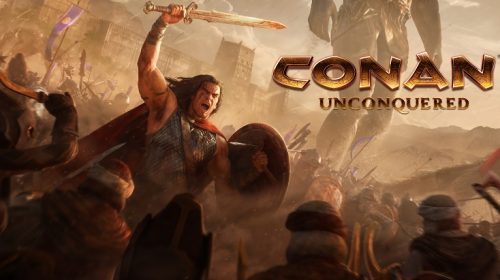