The original Earthfall came out of the blue, a small development team provided a fun, if flawed, co-op shooter that dropped you straight into an alien invasion with a bunch of weapons and 3 team-mates. A year and a half later the Switch gets a much improved port of the game along with all the DLC.

Even after all these years, Left 4 Dead is still the co-op group based shooter that sets the benchmark for all others. Lucky, then, that Earthfall is what happens if you substitute the zombie hordes in Left 4 Dead for Aliens. But can this alien shooter live up to its inspiration?

The story (of which there is very little in the actual game) is pretty generic, aliens have landed and taken over Earth. A small band of resistance fighters are left to fight back and, yep, your character happens to get mixed up in the resistance.  Cue plenty of world-saving quests to gather tech and, mostly, shoot as many aliens as possible.  It’s fun and does, occasionally, lead to some tense situations but it won’t win any awards for originality.  You do unlock story elements as you play, though these are presented as text. 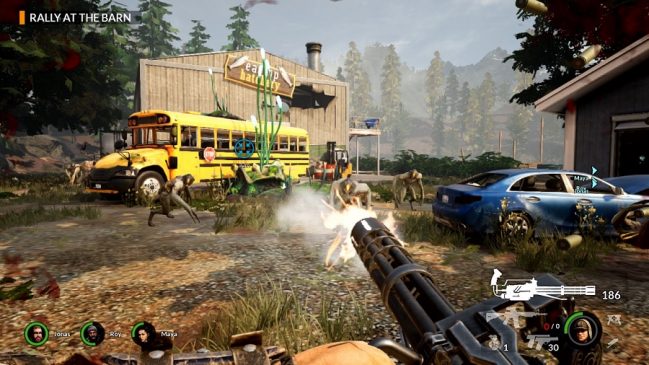 As you may have guessed, this is a game which is far more fun with up to 4 players working together.  It riffs of exactly the same vibe as Left 4 Dead in that you can work successfully as a team, healing, covering each other’s backs and choosing weapons carefully so you get a good range to fight off the different alien types.  If you’re working alone, Earthfall: Alien Horde is still fun with AI team-mates and they do a fairly good job of staying alive and even helping you out but they also have a habit of getting in your way as you try to down another alien.  I’d still recommend this to those who want to play in single player, though.

Initial waves are few and far between to give you a bit of a chance to try out the weapons and systems, but soon build up into a huge horde aiming to overwhelm you.  As a defence, you can dive into buildings like garages or some houses and place barricades as shields over the doors to allow you some breathing space.  These allow you to enter and exit without the aliens getting through but standing still for too long won’t get you anywhere.  It does, in later levels, play into a strategy of funnelling the aliens through one entrance, allowing you to set up guns to mow them down as they swarm.

Some of the environments are well thought out, with buildings that allow for small alleyways where you can easily get ambushed and roof spaces to walk along (sometimes used as a simple puzzle to gather something important), others are more generic.  The barriers and, later, turrets you can place do help to add a unique twist, though.

Despite its generic nature, Earthfall does have one thing in its favour; it’s fun.  It doesn’t pretend to be an ultra-realistic shooter with complicated weapons or tactics, it falls more in the Doom camp when it comes to dispatching the alien scum.  Guns are easy to find and use and there are a wealth of different types.  All are satisfying, though the aliens could have done with better death animations at times.  Whatever task you’re undertaking, it’s the frantic alien shooting that provides the entertainment here.

Your progress will unlock cosmetics for your character and skins for the weapons which should help you create something a little more unique to help your character stand out but even without these the characters on offer provide some good (if cheesy) voice acting and feel different enough to make a difference. 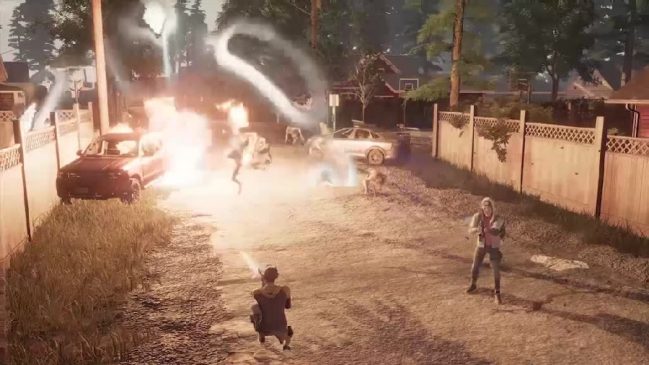 The Switch port is pretty impressive but does, naturally, cut a few corners.  Draw distance is especially noticeable and pop-in can be a little jarring at times, some environmental effects, such as fire, are also nerfed to keep the game running smoothly and, for the most part it works.  There are times, however, when huge swarms of aliens slow the frame rate down, though it never becomes jerky or unplayable.  Thankfully, most of the graphical detail is still present and the game looks great in general.  It even runs smoothly online with 4 players.

While there’s no voice chat, there’s a fairly good communication wheel on the D-pad to help give simple commands or ask for help if you’re downed.  While I would have liked to see full voice chat for a game like this, the wheel is a fairly good alternative.  Otherwise, controls are solid, especially with the Pro Controller, which I would recommend as the control option of choice for this game.  Sadly, there are no gyro controls (maybe the developers could patch them in?  I don’t know, I’d love to think they would) as Earthfall would really benefit from them.

Earthfall Alien Horde is great fun on Switch and there’s nothing quite like it out there on the eShop.  If you need a decent co-op shooter or fancy killing a bunch of aliens with AI team-mates then this game has you covered. 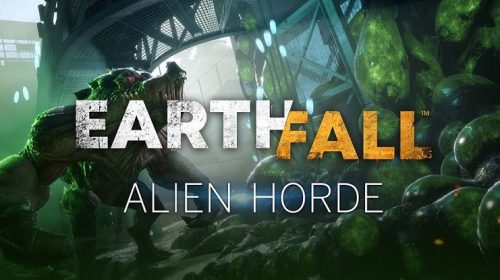