Far Cry 3: Blood Dragon is a love story.  It’s totally in love with a period of time we like to call ‘the 80s’.  If the directors of Predator, Robocop, Terminator and Commando got together and made a Duke Nukem film then Blood Dragon would be the game of that film.

For those of us of a certain age who lived through and witnessed the films and media of this particular period of time, a time dominated by men with big biceps and even bigger guns and a body count that ran into the hundreds, Blood Dragon may seem like a dream come true.  Ubisoft have managed to cram in so many references to films of the time, from early attempts at Predator to some cheesy references to Transformers: The Movie and even Star Wars at the tail end, that it feels like a love letter written to fans of this particular brand of high octane entertainment.  Michael Biehn even lends his voice to the main character for that extra level of authentication. And the Blood Dragons?  Think big neon T-Rex’s with a perchant for cyber hearts and you’ll be bang on the money.

The soundtrack is worth a mention, too.  Aside from an early licensed track deliberately added as another 80′s movie nod, this time to Predator, the synth-based background music and the cheesy montage and end theme are perfectly placed to capture the vibe of films like Terminator and hats off to Power Glove for their work here. A suitably apt story throws you into the shoes of cyber commando Rex ‘Power’ Colt on a mission to save the planet from an ex-army commander turned bad guy.  It drips 80′s cheese and is backed up by some wonderful 16-bit style cut scenes that, on examination, are a little ahead of their time given the whole 80′s vibe, but we’l let that slip considering how fitting they feel.  Story is arguably a mute point, though as, just with the movies it seeks to emulate, it’s really an excuse to ‘blow shit up’ and watch the ensuing firework show.

Thankfully, the game’s engine doesn’t replicate the technology of the time, instead relying on the Far Cry 3 engine to provide the neon lit island of the future.  It does a good job, too, with many of Far Cry’s creatures and landscapes transformed into post-apocalyptic equivalents and an AI as eager to catch you out by sneaking up behind you.  Despite the theme, the game still has many links to Far Cry in the way it plays.  Main missions usually involve liberating areas by blowing everything up, but the side-missions task you with stealth-based rescues and hunting, as well as looking for collectables.

In this case, the collectable items are VHS tapes, lab notes and old CRT TVs and these, 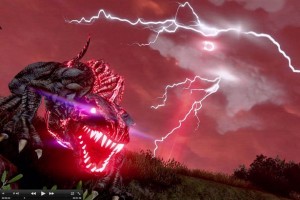 together with the other side-missions, help to increase your stats.  The stat tree is simplified from the slow, choice-based system and is now fully automated, giving your character extra powers, health and perks as they reach a new level.  It matches the straight-forward run and gun style of gameplay, Blood Dragon aims to be as uncomplicated as possible, just like the movies it parodies.

In fact, the game ramps up your powers to such an extent that mid-way through I found myself running around killing enemies with ease.  By the time you complete the game and go back to liberate more garrisons, you’ll be at Super-hero levels of power, mowing down even the Blood Dragons themselves in the blink of an eye.

Blood Dragon’s skill at creating a universe where your one and only goal is to kick ass is both a strength and a weakness.  The 4-5 hour run campaign time is certainly one to remember, but perhaps a little short, even for a budget digital game.  Of course, there are plenty of extra side-tasks to complete once you finish the main campaign, but the island is much smaller than Far Cry 3 and it won’t be long before you run out of things to kill, collect and liberate.

That said, Far Cry 3: Blood Dragon is a real blast while it lasts and anyone old enough to spot all the nods to those classic movies should leave with a big grin on their face.