I’ve been trying to remember if I’ve ever seen Truck racing on TV.  It’s one of those things that you’d probably unconsciously switch over to when you really should be heading off to bed instead.

As such, there are things I never knew about truck racing that I’m finding out while playing FIA European Truck Racing Championship, things like; it’s vitally important to cool your brakes with water as much as possible and that running out of water is nearly as bad as running out of fuel.  Also, trucks handle more like bricks with wheels than cars and just getting them around the track at first is a slog.

Let’s start at the beginning, though.  Truck Racing, as I’ll call it to prevent my fingers falling off, is an officially licenced game that sees you competing in the ETRC championship races against a bunch of other truck drivers across some of the world’s most famous tracks.    But first you’ll need to pass a licence test, the game’s tutorial mode.  You’ll need it, too, because truck racing is a very different kettle of fish to anything else and getting used to all the nuances will help you actually reach the finish line in a winning position.

Once you’ve passed your tutorial test, the race weekend is pretty much like any other; qualifying first and then the main race.  The one thing I will say about race day is that I never laughed so much playing a racing sim.  It’s not just your truck that goes flying off into the dirt all the time but most of the AI seem unable to handle their trucks cleanly through the course of the race, too.  Maybe this is what real Truck racing looks like?  I’d probably watch that, but for this game it does almost provide an extra level of realism and also livens up the slowly paced race with the other big rigs.

If you get bored of the official championship, the developers have added a World Series, which as far as I can tell doesn’t exist in the real world.  Think of it as a slightly more arcade-friendly version of the championship, though it’s no more fun.    Split screen is also on offer and this IS more fun, particularly if both of you are as bad as each other.  It’s a nice feature but also serves to highlight the lack of a proper online multiplayer mode that would have really helped this game’s chances.

Presentation also lets the game down with fairly low resolution tracks and some odd framerate issues during racing that frustrated me. It just doesn’t feel all that optimised, I could understand one without the other but lowering the graphics and still getting a juddery game is too much.  It’s not unplayable by any means, just annoying.

FIA European Truck Racing Championship is an interesting prospect that brings something new to motor racing and would be a welcome addition to the Switch’s few sims if it wasn’t for the quirks and the paired back presentation. 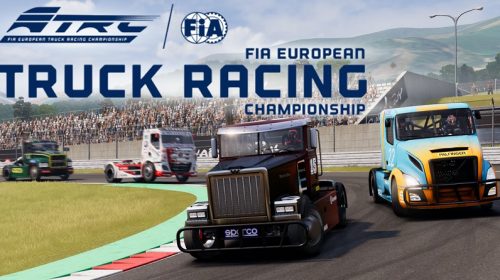