The last game I played about mowing lawns happened to be in the late 80s (thanks to Duncan MacDonald)  so it’s way past time for another go at a slice of grass cutting entertainment. Enter Grass Cutter Mutated Lawns

Grass Cutter is an action puzzle game about mowing lawns and avoiding monsters.  You see, a grass seed company has invented a new type of grass that they rushed to market, not realising that the DNA used would create mutated lawn monsters and bring on a grassy-apocalypse.

The goal, then, is to cut the grass.  That in itself is an issue when you can’t go back over the parts you’ve cut and there are plenty of obstacles in the way to damage your shiny mower.  Add in some monsters and you’ve got a tricky horticultural nightmare that even Monty Don couldn’t solve. 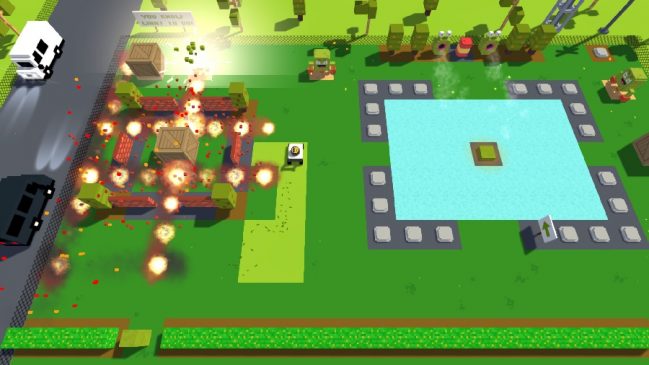 The aesthetics in Grass Cutter are designed to make it easy to see what’s going on and navigate the lawn, so objects are deliberately retro-like and blocky, even the monsters.  The top down view and cute monsters, plus the scenery beyond the garden and the attention to detail make this look far better than that sounds, though.  It’s definitely an indie game but it’s been designed well and will a lot of care taken to provide just enough detail to give the player some surprises without over-complicating the play area during the tricky task of mowing.

The gameplay is fast and frantic, I had a job keeping up with some of the stuff going on in the later levels.  Even just cutting the lawn in the right way without all the other stuff happening in the garden will keep you focusing your best hand-eye co-ordination.

That said, it never feels unfair and there’s a good balance here.   A fuel gauge is introduced early on which adds another layer of difficultly, but you can collect the gears lying around to upgrade your mower and this helps to get past those later tricky levels.

I had a lot of fun with Grass Cutter.  The game feels a lot like a homage to the run of Pac-man inspired 80s arcade maze games you’d find on 8-bit computers and it’s a perfect example of a fairly simple concept executed well and with a lot of humour. 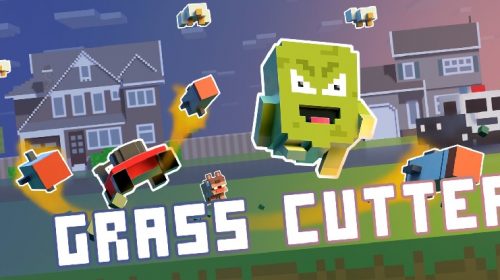