In Other Waters reminds me of old classic Sci-fi stories I used to read, stuff that dates back to the 1930s through to the 60s. It’s thoughtful, inventive and takes you off to a distant world by using the power of imagination.

My initial time with the game was very different, though. While the story does naturally lend itself to a little hand holding; you take the role of a strange AI suit that a scientist needs to use in their investigation of an alien land, there are plenty of buttons and knobs to control in order to get anywhere and it’s not always clear which to press at any point.

It took about ten minutes and a little trial and error to learn the routine for scanning and moving, though, and once I was past this hurdle I could sit back and enjoy the unfolding adventure. The interface you see in the screens is the same interface you’ll be looking at throughout the game, bar a few changes when you get to a base station, the areas that help provide research as well as a home point to zip back to if things get a little tricky.

What initially might sound a little restrictive becomes more intuitive and helps the player focus more on the story and the wonderful descriptions of some of the lifeforms you’ll find as you dive in the depths of this alien planet. Much of the atmosphere has been carefully created through the use of some wonderful sound and music, perfectly creating tension, mystery and calm when needed. The writing is very descriptive and emotive, urging you on to solve the mystery of this strange place and the fate of a missing fellow scientist.

Your main task as an AI suit, controlling the submersible ship, is to find a way through the winding rivers, caves and seas of this strange new world. Fast currents may need blocking, alien spores might crowd around you and toxic plants could potentially prove your downfall if not managed. The answer to most of these puzzles involves the use of said alien lifeforms in a natural defence, manipulating the fauna and flora by collecting samples. Puzzles range from simple instruction-led placing of spores to slightly more head-scratching environmental manipulation but all of them feel logical and natural to the ongoing story.

My initial concern that the writing and graphics would look too small on the Switch and Switch Lite in mobile form was put to bed after playing for a few hours in handheld. In fact, now it’s my preferred format, feeling more like holding a well written book that urges you on in order to solve the mystery, something I’ve been careful to avoid spoiling here.

In Other Waters is a rather unique game, certainly for Switch, that those who grew up with text adventures, old sci fi novels or who crave a more laid back adventure will love. It’s a fascinating alternative to the many faster paced titles out there, allowing you to take your time and revel in the other-worldly atmosphere. 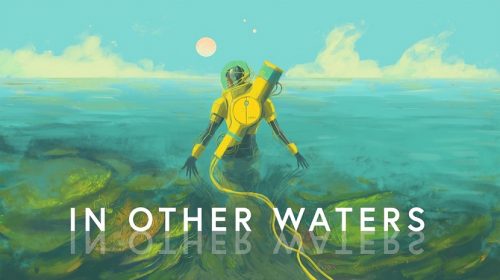