Anyone who has even a passing interest in Tower Defence games will have heard of the Kingdom Rush games.  Ironhide Studios series has often been cited as some of the best in the genre and their back to claim the top spot with Kingdom Rush Vengeance on iOS and Android.

The game follows the tried and tested route for a Tower Defence game; make your way through a world map where you’ll be presented with levels that have set routes for enemies to follow and spaces set up for towers.  Place towers strategically, based on the currency you have, and keep on top of the hordes as they try to reach the exit.  Let one through and you lose a life, lose all of your lives and it’s game over!

Vengeance twists things a little, not least in the fact that you’re now playing as the bad guy, Vez’nan, angry over various kings and leaders sitting comfortably on their thrones (some of which you may have had a hand in putting there if you played the previous games).  Ironhide have obviously just come back from watching a marathon showing of Game of Thrones, as the game is littered with in-jokes to the show.  Thankfully, it works well and the text-based story is entertaining, even if I would have liked a bit of voice acting and animation at times. 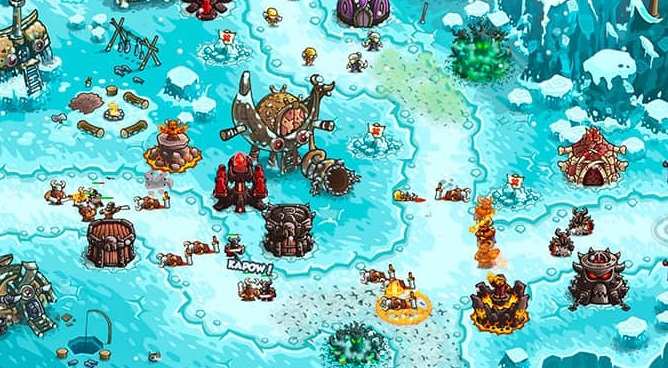 On the whole, the gameplay is pretty familiar; place a tower, upgrade it and stop the horde.  As usual, you also get a ‘hero’ who can help stem the flow with their powers and you unlock more of these as you progress.  New towers are also unlocked as you play, giving you different strategies and the option to go back over older levels to replay with your new skills.

One thing that has changed is the levelling up system.  previously, this was done on a tower basis, where each tower would get new powers.  In Vengeance, the levelling up is set into groups of abilities, which still roughly translates to tower types, but not as strictly.  It feels as if it’s a much better system, with branching levels that add to the strategy.    Extra powers can be bought in the shop using gens you earn in the game and used throughout the level at difficult times, but these can work out expensive if you rely on them too much.

The game looks the part, too, keeping the art style of previous titles.  It’s a little small for me, given recent Tower Defence games that use more detailed chunky characters, but it does allow for a bigger arena to play in and there’s always a lot of attention to detail in the characters.  With levels ranging from frozen mountain tops to volcanos and forests, the art work that has gone in to the game really provides a unique feel to each area.

As expected in most apps these days, there are In App Payments.  These can unlock all the heroes, towers and give you more gems for adding extra powers that can be used at any time.  Thankfully, it never feels like the game pushes you to buy anything unless you’re impatient.  Replaying levels and building up your army and powers will often result in getting through a tricky area.

While games like Realm Defence have more recently challenged the Kingdom Rush games for the top spot, Kingdom Rush Vengeance shows that Ironhide still have the magic to create a fun and enjoyable game that sees them retain their reputation as kings of the genre. 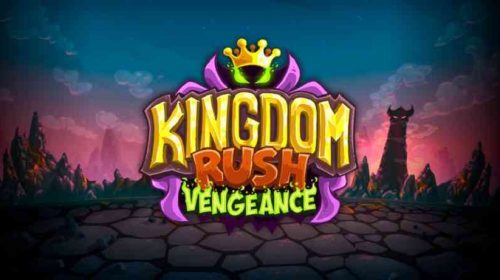