Unlike other shooters, this game doesn’t rely on kills to award a team but on how big your colourfully coated robot is.  Hit a body part on an opposing team’s robot and it shrinks, providing you with more body mass in the process and increasing the size of the team’s avatar, too.  Get the biggest avatar to win the game.

Things aren’t quite that simple, though.  Decreasing and increasing in size also changes the powers your robot has.  Bigger legs will obviously make you more nimble and able to make use of high walkways and roof-tops while smaller body sizes can fit in carefully designed crevices to sneak up on the enemy.   It makes for a chaotic and crazy game with long arms, short legs and little heads all over the place.

Morphie’s Law isn’t a new game, though, it hit the Switch last year and had its fair share of criticism.  Not ones to sit back and do nothing, the developers have worked hard to provide a brand new version as a free update which vastly improves the online side of the game.  The game feels far less laggy than before and getting a match is less like trying to jump fences.   Players now get far more choice in designing their morphies as well and even the musical interlude in the lobby has been given an overhaul. Now the game is on Steam as well as Switch with cross-play between them both there are more players online and the developer has done well to make playing on both platforms feel fair.

The visuals in the game really stand out with their Day of the Dead theme.  It’s an odd mix of robots and colourful paintings with calaveras adorning the robot faces, giving them a striking appearance.   Scenery, too, fits the theme with dusty walkways, colourful Mexican houses and Aztec style architecture all to be found.

Level design is certainly one of the game’s strengths and provides the much needed multi-level gameplay.  It has quirks all of its own, too, with tall slanted buildings that hide small gated entrances, tunnels that open out to walkways and more structures that allow for strategic use of Morphies sizes.

The game modes on offer don’t really provide much in the way of originality, beyond the body weight mechanics, though. I would have liked to see some more modes added for the Steam and Switch re-release to help provide a little more longevity.  Maybe we’ll see another update in the future to provide a bit of variety but for now it’s a small section of modes to choose from that might pull players away from the game before too long.  I hope I’m wrong and that people stick with this because it is something different in its design and gameplay and maybe it’s more the sort of game to dip in and out of rather than spending prolonged sessions on.

There are still some bugs here and there and shooting doesn’t quite feel as accurate as in more established shooters, but cross play with Steam and all the improvements from the new version have helped make this an easy game to recommend if you’re looking for something a little different in your competitive multiplayer. 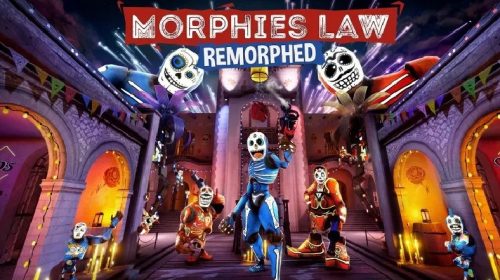