VR has been slow to take off, always waiting for the technology to catch up with the idea. The Quest, from Facebook-owned Oculus, is perhaps just one more evolutionary step but it’s the most significant so far.

From low polygon arcade behemoths to mobile phone and tethered headsets VR hasn’t exactly been an instant hit, more of a slow crawl for an idea that no one company seems to either be able to find the answer for or to completely kill off. It also comes with restrictions and caveats that immediately make it more cumbersome than it needs to be.

The Oculus Quest takes existing technology from several of VR’s previous attempts and knits them together to provide at least a partial solution. From mobile VR and its predecessor, Oculus Go, it takes the idea of a low powered mobile based chip that can run a fairly decent VR experience but removes the need for the phone. From PC VR it takes the motion tracking, controllers, immersion and comfort of headsets like the Rift and removes the need for wires, though the option is still there if we want it. With these it creates a new experience; wireless full VR without too many compromises but with all the same experiences.

How does it manage this with a Snapdragon processor more commonly found in mobile phones from a few years ago? While Quest can’t cope with the same level of detailed graphics as those tethered solutions (both the Rift S and the HTC Vive Cosmos are stunning in this respect) it allows developers to play within the same worlds while pairing back the detail.

That said, playing games like the popular Beat Saber or the excellent Fisherman’s Tale on Quest and you’ll find the experience almost on par with the PC version but with the advantage of a 360 degree play space and no wires to hold you back.

To help with safety, Oculus have invented the ‘Guardian’ system, an area that you map out yourself using one of the controllers when you first play in a new space. It can be anything from a tight circle around you to the whole room space, it’s quite impressive just how much space it gives you. Stray too near to the edges of this space during a game or app and you’ll instantly see a red wall of lines blocking your path, warning you not to go any further.

The controllers, the same as on the Rift S, are very responsive with accurate mapping and enough buttons to allow developers to reproduce finger and hand movements in VR. Battery covers are magnetic which led to a few interesting issues at first where they flew off but you do get used to the hand placement to stop this happening.

The lower textures are somewhat noticeable if you really look for them, assuming you’ve got the same games on hand for PC VR and a few of the early games ported to Quest have some ghosting from moving the controllers too fast, but mostly it’s a really good experience. It helps that the OLED screen produces wonderful colours and deep blacks while the resolution is actually higher than that of the Rift S at 2,880 x 1,600, which also effectively removes the ‘screen door’ effect that breaks immersion. Those who have made the leap from an HD TV to a 4K one with HDR will know what a difference better colours and a higher resolution can make.

Battery life suffers a little under the weight of the tech being pushed to its limit. The Quest lasts 2-3 hours depending on what apps you use and will need a quick charge before it’s ready to go again. 3 hours under a headset in a virtual world without a break is enough for most people, though.

If that was all Quest could do then it would still be worth considering, but the team at Oculus have bigger plans. As of late November, the latest software update means that simply connecting a USB 3.1 cable to your PC or laptop’s USB 3 port can turn the Quest in to a fully fledged PC VR system as well. For now, most good quality cables (either USB 3.1A or USB C to USB C) will work. I’ve tested Amazonbasics 3M cables and they’re perfectly fine. All you need to do is download the Oculus software and wait for the headset to connect. A few teething issues meant that early adoptors to the Beta had to try a little harder to connect but it seems to be all sorted out now.

Playing No Man’s Sky in VR using the Quest is pretty much the same as with the Rift S, though there are some slowdowns, most likely due to the cable’s capacity. Things will further improve as the Facebook team launch their official Link which takes the form of an optical cable, allowing a much faster throughput of data. For now, though, it seems to work on everything I’ve thrown at it.

Let’s not pretend that VR won’t get any better than this. Of course it will. The march of time will bring new technology with better graphics and battery life, but what Oculus Quest shows is that getting the balance right and finding a headset that is instantly and easily useable with great PC-like experiences even without a PC can only push the market for VR forward in a way that VR hasn’t quite managed until now. 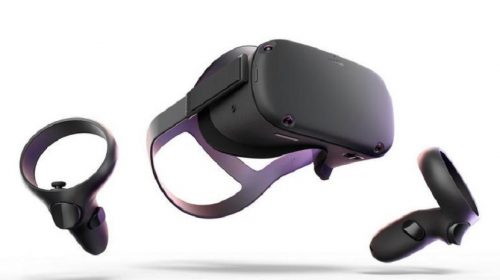