OhShape is pretty unique, but it’s a little like the offspring of Beat Saber and the Hole In The Wall TV show where people had to fit through a series of odd human shaped walls.

It works perfectly in VR, particularly in the Oculus Quest, where you’re free of wires and can perform all the fast paced actions without fear of pulling your PC or laptop over.

The idea is that you stand there with a conveyor belt of walls heading towards you. Most have those human shaped holes in for you to adjust your body into, some have areas to be punched, shattering the wall and then there are the obligatory Beat Saber-style columns to duck and lean past. On top of this are small bonus items floating around that you’ll need to collect in order to improve your score.

The levels start off easy but are pretty fiendish towards the end and provide plenty of entertainment even for those outside of the headset thanks to the shapes you’ll be trying to pull off. Watching as a spectator is equally entertaining as the VR wearer continues to frantically duck, make star shapes and place their bodies in all sorts of weird poses in time with the music.

Graphically the aesthetic is clear and clean, possibly a little too much so in some ways, but it does mean that the walls are fairly easy to see in advance. That said. sometimes the red walls that you need to break through obscure the next wall until it’s almost too late.

The lack of well known artists in the music playlist seems a bit of a let down at first but the generic tracks are still pretty good and the icing on the cake is that you can legitimately add your own music to create levels, something other developers should take note of. That said, it’s a fiddly process where you’ll need to download specific tracks along with their levels rather than just using your own playlist.

Leaderboards give the game longevity, as do the three difficulty levels (with even easy being a bit of a challenge at times). Interestingly, the developer has allowed for further tinkering with the higher difficulty levels in terms of speed and number of walls, helping those who find them a struggle to get the most out of the game.

If you fancy a new music based game and want something pretty different to the usual block breaking or shooting elements, OhShape is a great alternative with its nifty features and the entertainment it gives those around the player, watching them flail around in odd shapes. 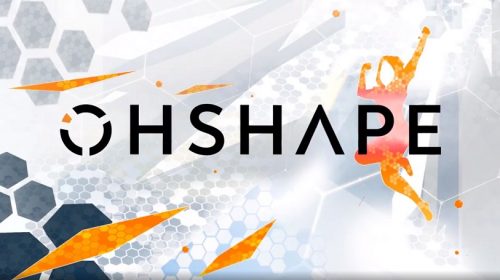