Activision’s sequel to the mega-successful Skylanders: Spyro’s Adventure has been out for a while now, but the Wii U version was a scarce box to find on store shelves at the time.

Recently, I managed to get hold of the game online, packed with its 3 Skylanders figures, including one of the new giant figures that sets this game apart from the Spyro game. 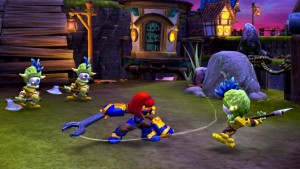 The story starts with the evil Kaos exciled as a toy on Earth and waking up to break free from his packaging.  Finding a portal in the shop, and avoiding a bunch of Skylanders in the process, he manages to hop back to Skylands and cause more trouble.

Now with added Giants
As the threat grows, it’s decided that the Skylanders Giants, once lost long ago, should be reawakened to help the other Skylanders stop Kaos once and for all.

What this means in the real world is another set of impressive toys to use on the portal of power.  The giants are even more detailed and far more impressive than the series one toys, standing out with their huge size.  But there are also new series 2 skylanders, some of which are posable, and lightcores, which light up when placed on the portal (and they’re very impressive when they do so).  It’s a parents nightmare, but a kids fantasy as the number of figures to collect grows.

That said, there’s a certain thrill. even for us big kids, at seeing these toys come to life on the screen as soon as you place them on the portal supplied with the game.  I still think that storing all the stats for each character in the toy itself is a genius idea and is perfect for those who want to take their Skylanders around to a friend’s house to play.

The same, only better
The game pretty soon settles in to familiar territory for anyone who has played the original.  Simple platform puzzles are interspersed with attacks from Kaos’s forces.  These battles begin with simple attacks that can be eventually levelled up to form far more powerful powers required for the later, tougher enemies. 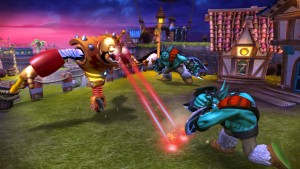 powers can make the task far easier.  It’s a basic level of strategy, but pitched perfectly for the over 7 year olds who will be the main audience.

Once defeated, enemies drop all sorts of treasure which can be used to buy hats that give extra powers or other items.

In addition, there are mini-games to complete and special areas that can only be unlocked by Skylanders with the right elemental power.  It’s worth it, though, if you want to collect more treasure.

Where Wii U Differs
As with other recent Wii U games, you can play Skylanders Giants directly from the Gamepad screen.  This frees the TV up for parents and lets the kids sit on the floor with their portal and screen to play.  It works surprisingly well for the game and there is little detrimental effect on the graphics front.

When playing on the TV the gamepad comes in handy too, showing stats for the Skylander you’re using, as well as pointing to your current missions.

Having tried out the 360 version, the graphics on offer here aren’t significantly different, though they’re still very nice on the eye, with many different scenes from snowy mountains to grassy farmland full of bouncing sheep (that you can attack).

In a nice touch, the mini games can often be played with motion controls, making them instantly more fun than those on the other consoles.

Sky High
Skylanders may be aimed at kids, but I know many fathers who have a secret soft spot for Activision’s toy-based game.  Giants won’t change this and may even encourage a few more fans with the hulking but lovable giant characters and tweeks to the gameplay.