The sun is out (well, it was at the time of writing) and what better way to celebrate this time of year than to play beach volleyball?

Admittedly, Super Volley Blast would be beach volleyball on your Switch, not on a beach, but given the machine’s portability it could be on a Switch on the beach, possibly even near an actual beach volleyball net.  Just don’t get any sand in it.

Spanish developer Unfinished Pixel’s sunny sports game is a fun multiplayer title that brings yet another sport to Nintendo’s console.  From the outset it’s easy to see that the game has gone for a fun cartoony look and feel and the bright and breezy atmosphere it creates is an ideal match for the sport.

The game is designed for local multiplayer, where it provides the most fun, but a robust single player story mode helps to hone skills as well as providing a short but enjoyable story.  Up to 4 players can take part in the 2 vs 2 matches, in either Quick Match or Tournament modes, using a Joycon each.

As you’d imagine, passes, lobs, spikes and jumps make up the basic gameplay, all of which are added to the 4 buttons.  Getting used to pressing the right one at the right time is the first hurdle to overcome but they’re quite responsive even though jumps and spikes need to be timed just right to successfully pull them off.  The challenge will ensure that getting a really good spike and winning a point from it is very satisfying.

While multiplayer will rely on your skills and those of your friends, the AI provides a surprisingly good opponent.  The only issue is that its tuned to a harder difficulty, which may put younger or less skilled players off.  There’s certainly an element of learning moves and skills here, something the tutorial is perhaps a little short to do, but once it clicks you’ll find it a  little easier (though never overly easy) to beat the CPU opponents.   While tournament and quick play have the option to change the AI difficulty, it would have been nice to include a few different skill levels for the story mode CPU controlled opponents.  Thankfully, your AI partner helps to even things out a little, though I found occasions where we would both go for the ball and they would leave it.

Despite the difficulty, Super Volley Blast is a really enjoyable indie sports game to play with friends and really feels at home on Switch. 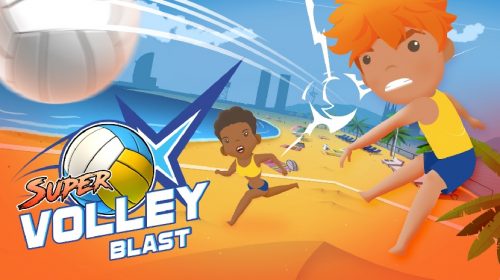