Kart games are two a penny, you have Mario Kart to thank for that, but this one is a little different because it puts you right into the thick of the action, via VR.

Available via both Steam and the Oculus Store (and now, PSVR), Racing Karts uses a tried and tested formula but places it firmly into a 3 dimensional space around you. It’s an invigorating feeling and also a slightly queasy one if you haven’t got your VR legs yet, though there are some ways to help combat that thanks to a few modes that help against dizziness.

While it’s still a fun kart racer, Touring Karts takes things a little more seriously in terms of the cars and tracks, with the feeling that they’ve taken some inspiration from Formula 1 and other racing styles. I said ‘some’ because while at times it might look serious, it still features overpowered silly powerups, including giant chickens and fizzy drinks, that made me laugh out loud at times.

The powerups are well thought out and you can even combine them for even more comical effect but they do have one issue, you need to aim precisely to stand any chance of hitting your opponent and that can be really difficult while racing at high speed and turning another sharp corner.

The tracks are a bit of a mixed bag, some having far too sharp turns in VR while others are far more of a joy to race around. There are over 20 tracks to race on, though, so you’ll always find a few that will better match your style. Aesthetically, the mix of cartoony and realistic in a melting pot of roadside scenery and fluffy clouds is an interesting one and helps the game stamp its own identity on the genre.

Other areas occasionally fall down on the graphics front, such as re-centering that doesn’t always put you back exactly where you’d expect the driver to be and a few issues with competitors suddenly appearing out of nowhere but these are generally isolated cases and the game happily runs on a GTX 1060, the base system for VR, though better graphics cards obviously improve things further.

The issue with dizziness mentioned earlier is something that many fast paced games with a moving horizon face and the developers have done a good job of catering for those who find the whole thing a little stomach churning here. The first is the usual vignette mode and the second a far more inventive arcade machine mode that places you in one of those Hydraulic arcade cars, staring at a video game in an arcade environment. It’s another nod to their sense of humour while making the game more accessible at the same time.

Multiplayer is a big feather in the game’s cap and developer Ivanovich Games have done a good job of introducing cross-platform play between PC and PSVR. If there’s one thing that will keep this game alive it’s the multiplayer racing,

There aren’t a whole lot of arcade racers around for VR headsets so it’s good to see one that does the job well and with good use of humour. Touring Karts is well worth picking up if you like your Mario Kart and fancy a VR version. 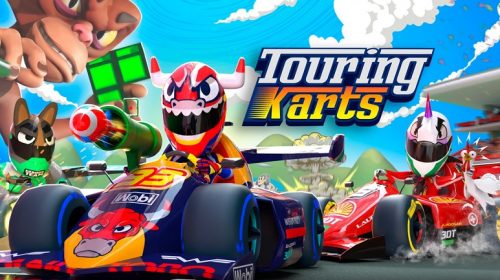