Uncharted makes its long awaited arrival on Playstation 4 and it certainly is a treat for the eyes.

The story is typical Uncharted with Nathan being on the hunt for a long lost treasure. The treasure in question just happens to the biggest pirate haul ever located in the never found before Libertalia. Playstation history suggests that if anyone can find this treasure then it is Nathan Drake.

All standard Uncharted material in terms of plotline and I’m sure the fans wouldn’t have it any other way. Where it differs slightly is the slow start; we don’t just hit the ground running with this title. First up is the backstory to Nathan’s life. Nathan’s brother Sam plays a big part in the game so we have some introductions to be made. Part of those introductions involved the Drake brothers when they were much younger. Courtesy of some flashback scenes, we learn a little more about Nathan’s background. Next there is the prequel adventure to find this treasure. This isn’t the first time the Drake brothers have attempted to find this treasure and we get to live through the previous attempts. And finally there is a present day update before we get started. Nathan is in retirement and living, by his standards, a fairly mundane life. Married to Elena, they have given up the treasure hunting life and we get to sample a normal evening in the Drake household. There is a nice scene within that were Nathan reminisces in his attic about past adventures, clearly missing the good old days. And for Playstation games, there is a nice little Crash Bandicoot playable level to bring back some memories for the player. 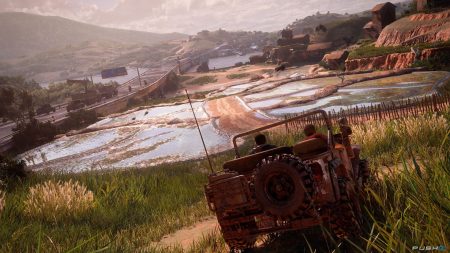 I must admit I enjoyed the slow start more the second time through. On the first play I guess I was just impatient to get started and it felt a bit slow and drawn out. Second time through I got to appreciate it more.

The gameplay is classic Uncharted with some nods to The Last of Us thrown in there. The running and gunning and climbing are all as before but there are some tweaks. The climbing is much more fluid and Nathan will reach out letting you know there is room to manoeuvre. The shooting is something Uncharted has always taken stick for and I don’t think the latest entry will change that. I find it more enjoyable to switch to the auto-aim. If one were to be picky then there are still a few moments when the large jump and grabbing of a small ledge aren’t too convincing.

New additions to the mix are the rope and the sliding. We are introduced to the rope and grappling hook in the early flashback scene where Sam teaches Nathan the benefits of some swinging action. Whilst Nathan seems to have forgotten all about this in Uncharted 1 – 3, it is fortunate he remembered for his latest outing as it is used a lot. Sliding is very much as it sounds but seldom done just for the fun and only ever done when there is a drop at the end which will result in death. Again, if I was to be picky then perhaps some of the sliding across is a little hard to swallow. And the sliding does seem to come close to being overused with even the brothers make a comment along the same lines.

In terms of nods to The Last of Us there are optional conversations. There is also the use of crates. It is amazing how often a crate is discovered that can be used to progress. The sheer luck of finding these crates is similar to the wooden pallets in The Last of Us. The biggest nod is pretty much a head butt; stealth. The Last of Us style stealth has arrived in Uncharted. I liked the stealth in The Last of Us but not such a fan in Uncharted. It lacks the tension but also feels a little out of place in Uncharted. The stealth scenes are definitely set up for stealth and the going gets tough if you are spotted. You can track enemies to help, unless you are on the hardest difficulty which posed some problems on my 2nd play through. If you felt the stealth in The Last of Us was a little hard to buy at times then Uncharted is worse. How the brothers remain out of sight in the long grass of the shrubbery is a mystery to me but eye tests all round for the enemies.

The optional treasures return but on a mass scale, there is a lot to be found and some of them are very well hidden. There are also journal entries to discover. Nathan has always had his journal but his head is buried in it a lot more this time round and he seems to have become quite an artist with the quality of his pencil sketches. 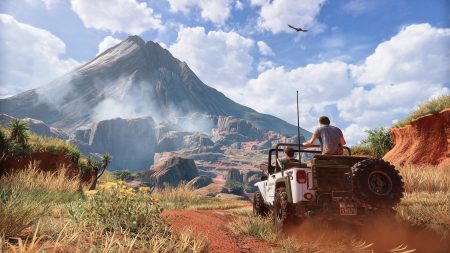 Graphically the game is simply stunning. The locations are excellent as always and you will often just stop to admire the view. There are lots of little nice touches which I like to see such as the passengers all looking over the edge of the cliff as you drive perilously close to it or the stones continuing to slide when you slide on the gravel. It really is a showpiece for the Playstation 4 and Naughty Dog have done an incredible job.

The multiplayer is also decent and I’ve spent a little more time in that than I expected it. There is a nice practice mode where you are taught all the ins and outs and set challenges to practice what you have learned. It works well as an introduction and it does mean that newcomers probably won’t be overwhelmed.

Uncharted 4 is a stunning game and as a package, the best of the series. I do think it suffers a little from familiarity and the slow start didn’t do much for me first time round. The score after my first play through would have been less but I have really appreciated what is on offer the 2nd time through. The banter between the characters isn’t quite as jovial this time round. Things are more serious so it is understandable but it does mean a bit of a different tone. There are some good scenes between Nathan and Elena as their relationship is stretched. It is not essential to play the previous games but those familiar with the characters will certainly get more out of Uncharted 4.