As far as gaming monitors go, Viewsonic seem to have the balance just right with their aesthetics.  It’s not gaudy enough to become an issue with a different coloured PC setup but it’s also no Plain Jane, either.

It feels as if they’re playing it cool with the design, there’s a very visible red stripe along the base and the middle of the stand leading up to the monitor. Aside from that, only a neat little Viewsonic logo on the middle of the lower edge of the screen and some low level menu function icons break the blackness of the surrounding casing.  Even the power light is dimmed. For me, this is perfect.  I don’t want anything to distract me from my game out of the corner of my eye. 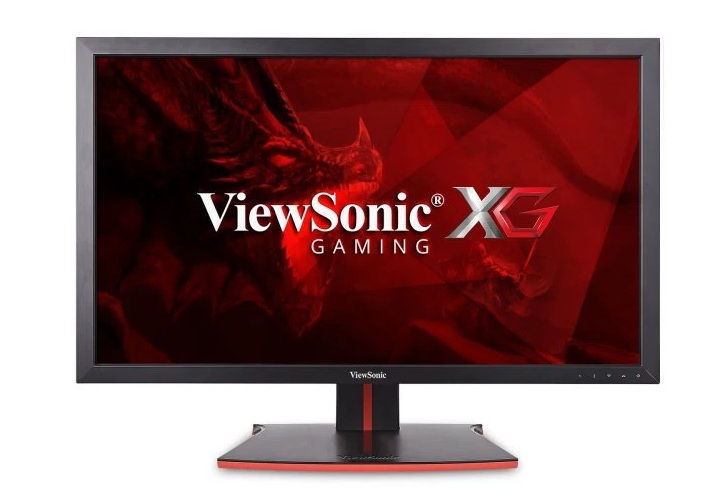 Putting the whole thing together took 5-10 minutes at the most.  The base slots in and screws into place and the monitor can then slide up and down to suit the height of the desk.  Adjustment is impressive with about 12cm leeway between the lower and higher setting.  Tilting back gives probably more tilt than you’ll ever need and while the forward tilt is less, it’s still more than you’ll probably need.

Looking at the specs, the monitor displays at 3840 x 2160 pixel resolution on its highest setting and the picture is boosted by ViewSonic’s ownSuperClear IPS technology. 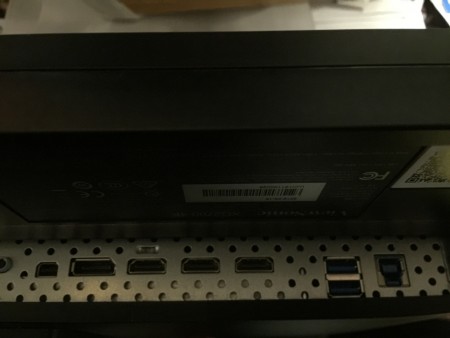 Port-wise, the XG2700-4K is more than well catered for, with DisplayPort 1.2a, mini DisplayPort, 1 x HDMI 2.0 and 2 x HDMI-MHL.  The HDMI-MHL connectors are a fairly recent addition which are designed to connect and control compatible mobile phones and tablets straight from the screen. If that wasn’t enough, the monitor boasts 2 USB 3.0 ports and one USB 3.0 Type B port below the screen at the rear, plus two USB 3.0 ports on the right hand side.  That’s more than enough for all your gadget needs.  As they’re powered, the monitor can run PC-sticks and Amazon Fire TV Stick with the power from the USB 3.0 port.

Response time is lagging behind other gaming monitors on paper at 5ms, but in use this never seemed to be a problem.  I came across little to no ghosting on games like Doom and GTA V at 4K and the only issues were with my graphics card trying to keep up. If you ue an AMD card then you can bring AMD’s FreeSync technology into play as well, helping to smooth the movement out even further.  4K can be run at 60Hz

As you can imagine for something being sold as a gaming monitor, the XG2700-4K has its own dedicated Game Mode which aims to produce the best results from the picture quality and motion while gaming.  I found that this sometimes needs a little tweaking in terms of black levels as the monitor itself is sometimes a little dim for my liking in comparison to others we’ve tried.  There is black stabilization on board but this doesn’t quite make up for those levels. 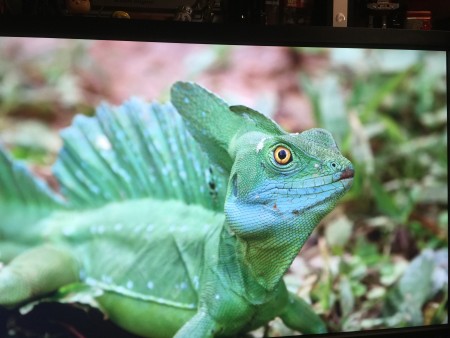 Playing 4K video content, the colours really pop and it’s quite impressive just how clear and vibrant this monitor is. The viewing angle is pretty large, too, though this won’t be an issue for most gamers unless they regularly enjoy having spectators around.

Thanks to a picture-in-picture mode you can even play games while watching video content from another device. The Viewsonic 4K will allow you to have up to 4 sources on screen at once, assuming you can cope with the sensory overload. There didn’t seem to be any negative effects to running all these sources on screen, either, other than the reduced screen area.

Menus are clear and easy to navigate, though everything is done through the touch sensitive buttons and the more complicated menus could have done with a dedicated remote.  Viewsonic have got around this by including the most important picture modes on a single button to quickly flip between them but 4K picture setup (which I found was needed to get the optimum picture) requires navigating through several menus using multiple buttons.  That said, you won’t be surprised to hear that gaming modes are well catered for with unique built-in modes for several genres, namely FPS, RTS and MOBA.

I was really impressed with both picture quality and the response time of this Viewsonic screen.  Despite the large screen area and wealth of ports the monitor never feels larger than it needs to be and the low profile red stripes give it the edge over some of the more tacky designs of other gaming monitors.

Although there are fiddly menus as you delve deeper into the settings, Viewsonic’s simple game mode options provide most of the settings you’ll need at short notice.

The picture-in-picture function is just the icing on the cake for this impressive 4k Gaming monitor.