“Perfecting Rise: Race The Future is our current goal as it is considered one of the best racing games on the
Nintendo Switch.”

The new patch includes the following:

– HD rumble with sensitivity settings:
Each surface has its own type of vibration. When the boost is used the controller also vibrates differently
as well as for each type of situation, for instance when after a jump or if being pushed by another car.
You can adjust the intensity differently for Handled mode and TV / Tabletop (Settings menu). 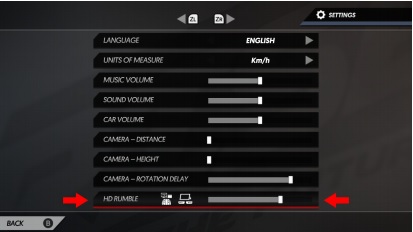 – Stability setting for each vehicle with a range of 0% to 100%:
The gameplay of Rise is a mix between pure arcade and real handling behaviour based on an advanced
physics engine. To please the casual gamers as well as the racing fans, a fantastic new stability setting
has been introduced. Basically the player is able to tweak each car to his taste while still keeping its
main characteristics.
Do you want a car a bit more powerful but heavier to make it easier and more stable to drive? Then just
set the Stability to 100%!
All the players who found the gameplay too difficult to apprehend will be totally convinced now.

– Steering Sensitivity setting for each vehicle with a range of 0% to 100%:
This is very useful for the joy-con and other different type of controllers. Again the purpose is to give the
players more freedom for him to feel comfortable and enjoy the game fully. The car will react slower or
faster making it more manageable.
You can adjust these settings in the “Car Select” menu or directly in the race (Pause> Car Settings).

– Improved IA:
One of the main critics was that cars used to collide with each other too strongly and could jeopardise
the player’s race. The new AI deals with vehicle avoidance and emergency braking to limit collision from
behind. The AI vehicles break harder and detect earlier to prevent touching the player. No more
frustration!