Space trading and combat game, Elite Dangerous, is coming to Xbox One this year and possibly PS4 at a later date.

In an announcement on the forums, creator David Braben announced the deal with Microsoft to bring the latest game in the classic franchise to Xbox One.

“When asked, I’ve said we’d be mad not to consider bringing Elite: Dangerous to console. Well, that madness is about to end! Today we’re announcing that we will be bringing the full Elite: Dangerous to Xbox One this year. Xbox players have supported Frontier well over the years, and thanks to games like Zoo Tycoon and ScreamRide we know the hardware well, so Xbox One is a natural fit for Elite: Dangerous’ console debut.” 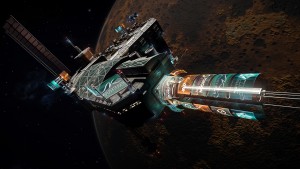 He also promised that the Xbox One version of Elite Dangerous would be “the complete and authentic Elite: Dangerous experience. It will not be “dumbed down”. We’ll be working with an all-new audience, but that doesn’t mean a change in direction for the game, and nor does it mean slowing development on the PC version.”

When asked whether the Xbox One exclusivity was timed, a community manager on the official forums replied “Console debut in 2015 on Xbox One. We will be able to bring it to other platforms later and we’ll talk about that when we have something to announce.”