Sports Interactive and SEGA are delighted to unveil the headline features for Football Manager 2020. This year sees a focus on long-term planning and development that make saves spanning multiple seasons even more compelling.

Player development and club identity are brought to the fore in FM20 and managers can have greater input in both. Additionally, FM20 sees improvements to the in-match graphics as well as new backroom advice and staff roles. 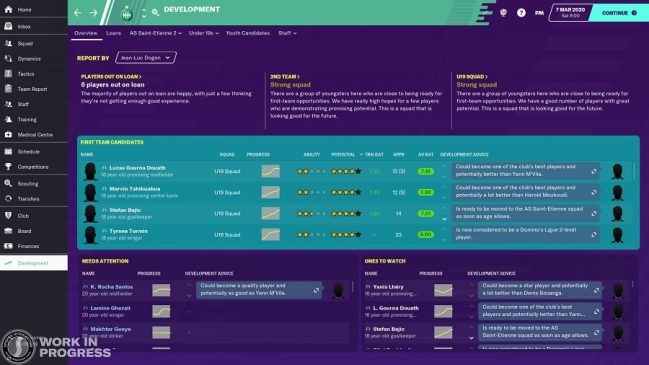 Take full control of your youth team operations in a new all-encompassing hub. Nurture your young stars from the moment they arrive at your club and through the youth ranks until they’re ready for first-team action.

The Development Centre is designed to give you the ability to maximise the potential of your young player’s more easily.

The Development Centre lets you see an overview of the young players at your club with relevant advice about their development displayed. The ‘ones to watch’ in your squad are also highlighted along with players whose development is in need of attention.

There are individual tabs for viewing your players out on loan, your youth squads and youth intake in more detail as well as your entire youth staff and their responsibilities. From the youth squad menus, you can view their tactics, training schedule, recent matches and upcoming fixtures. 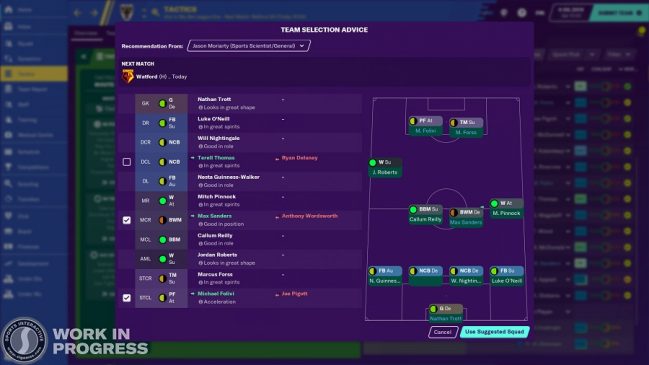 Develop a culture, work with the board to achieve ongoing objectives and plot a course for your club to progress in seasons to come. Club vision goes far beyond the boardroom; impacting on transfers, playing style and competition expectations as you look to strengthen your club’s identity and meet the multi-year milestones.

The board now set their club vision that gives each save more of a unique identity. Because this vision is far-reaching and designed to be achieved over several seasons, it means that you’re not just being judged on your league position alone each season but on other factors such as whether you’re adhering to the club’s culture or hitting the milestones of the board’s five year plan.

These ambitions are outlined to you in the new Welcome Meeting. This takes place before you even get to your inbox on your first day at the club and involves the board setting out their expectations and ambitions as well as giving you background on the club, first-team squad, backroom staff and your responsibilities. This meeting takes place in the new boardroom environment.

A whole new way to define a player’s standing in your squad. Build in current and future playing time across the length of a contract, defining a clear pathway from Fringe Player to Star Player and everything in between. 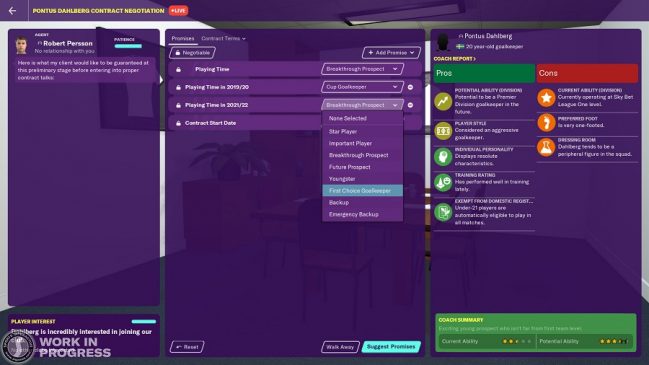 Now, playing time define the status of a player within the squad and a playing time structure can be promised to a player for the duration of their contract. As part of the contract negotiations, you can offer playing time over future seasons which can be used to give a young star a defined path into the first-team, for example.

You’ll be able to keep track of how well you’re sticking to the promised playing time and discuss any discrepancies between actual and proposed playing time with your players. Your backroom staff will provide you with advice relating to playing time and give you a summary of player progression and how that may affect a player’s playing time from one season to the next.

The match experience in FM20 is the best looking in the series so far. New player models this year are more lifelike which also extends into the manager avatars that have also been remodelled.

The pitches in FM20 have also been improved and are more visibly affected by weather patterns and display more noticeable effects of mud and water. For example, you’ll be able to see trails on the pitch from where a player has made a slide tackle.

New roles, advice and interaction make your staff more involved and important than ever. More collaboration across more areas brings the game closer to the structure of a real-life backroom team.

There is a greater level of backroom advice available to you including more detailed team selection advice from your backroom team, including a suggested squad to use on matchday.

There are two new staff roles this year to reflect the changing face of modern football. These are: Head of Player Development and the Technical Director.