ASUS Scar range of laptops is in its third iteration (only because it released two of these so close together) but for those who look at the £2000 plus price and feel faint, it’s worth checking out the mid-2018 refresh in the Scar GL703GM.

A year may well be a long time in hardware circles but prices can be more favourable while last generation’s Pascal cards (the first proper desktop equivalent graphics cards in a laptop) mean that there’s still a lot of power under the hood.   ASUS launched this updated range of their first Scar with the new (at the time) Coffee Lake i5 and i7 processor back in June last year with the processors having some major improvements over the 7th gen intels.

The other big improvement in the refreshed Scar model is the size, this is a pretty thin gaming laptop by any standard, particularly one that houses a 1060 or 1070 GTX card.  The model I’ve used for testing is the i7-8750H hexa-core processor, 16GB fast DDR4 2666Hz RAM and Nvidia GTX 1060 graphics with 6GB Vram.

Even with the case closed this laptop still looks the business thanks to a gun-grey aluminium lid that features an LED ASUS ROG logo.  The size of the laptop is one of the first things you notice, it’s only 25mm thick which isn’t the thinnest laptop in the world but is far thinner than most of the competition in terms of gaming laptops.  It’s also light at 2.7kg. 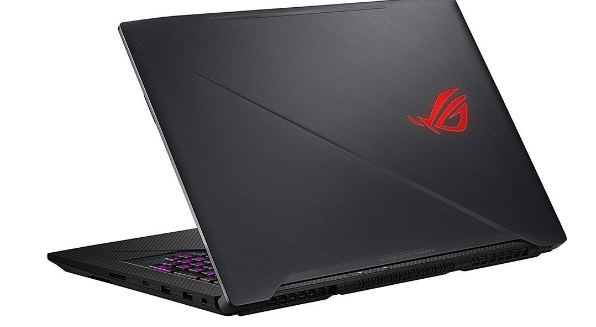 Also the sides you have plenty of options port-wise, with 4 USB 3.0 ports, 2 on each side, full HDMI and mini-displayport on the left, along with an Ethernet port and power socket, then USB C (not Thunderbolt, sadly) on the right and an SD card reader.  The back and base feature large air grills for good air circulation.

It’s worth noting that ASUS, as usual, provide a great upgrade path through the single screw panel in the base which allows for easy access to the spare memory slot, NVMe SSD and SSHD drive.  These can all be upgraded in minutes.

Internally, the CPU is the main upgrade here with the Coffee Lake i7 clocking in at 168 points on the Cinebench R15 test in single core operations and 1015 in multi-core.  This is a huge step up from the 7th Generation processor found in the models from the beginning of the year.

The screen, too, gets an update, with a new manufacturer providing the 17.3″ 120Hz TN panel.  Despite being TN, this screen manages to produce a pretty good brightness level and colour accuracy as well as being around 5ms for response rate.  Add in that 120hz and you have one amazing gaming display for a laptop currently doing the rounds at under £1000.   The only downside is that the screen still has the same issue as other TN panels in that viewing angles are compromised, you’ll notice the colours fade or darken when you tilt the screen or look from the side, but for most people using a laptop, this won’t be much of an issue.

The keyboard feels fine to type on but is never going to match up to a mechanical keyboard.  Keys are light but responsive, it’s pretty average all round, as is the trackpad, which is made of plastic rather than glass, though at least it features separate physical buttons. Keyboard lighting is one of ASUS trademarks and it makes a welcome return in the Scar, with 4 areas of programmable colour on top of more general effects such as a strobe or rainbow.

The downward facing stereo speakers are angled at 45 degrees on each side of the keyboard and manage to produce good but not outstanding sound.  I’ve yet to find a laptop that surprises me with sound quality and this one won’t change my mind any time soon.  It does work better than those laptops which have their speakers facing completely downward, though.

We’re in late 2019, the RTX cards are now pretty established, so why am I recommending a laptop with a 1060 GTX?  Well, while there’s certainly an increase in FPS from a 2060 card over a 1060, the GTX card in this laptop can certainly still hold its own in any AAA game you throw at it.  High FPS was achievable in most titles at high or ultra settings and, amazingly, the laptop never ran over 80 degrees.   That’s at £1000 difference, remember, and with the same processor.

Cooling has been vastly improved over the previous VM model, though the fans still kick up even during mundane tasks.  They’re not whisper quiet but they don’t whine and are fairly quiet until you place a large load on them and even when they do max out it’s still far quieter than previous models.

Battery life is the one downside here, in line with many other gaming laptops, this is not a laptop you’ll want to take away from a wall socket for too long.  Gaming was pushing the battery to last under the 2 hour mark while day to day tasks were mostly under 3 hours.  Despite the low weight, you’ll need to take the power brick in tow when you’re out and about with the Scar.

If you’ve been considering a gaming laptop but aren’t keen on shelling out for the newer models, the ASUS ROG Strix GL703GM represents great value for money. 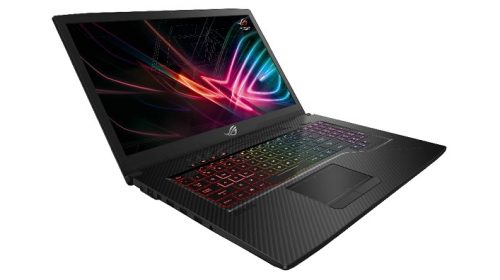