It may have been spawned as a sort of Grand Theft Auto tribute but the Saints Row series has certainly made its mark as a very different kind of open world game in more recent times and Saints Row IV takes this to a new extreme.

Seven years ago we were treated to Volition’s vision of an open world game universe that still remains one of the most over-the-top exercises in game design even today. While Saints Row 3 came close, this adventure began after riding a nuclear missile and then making the main character, The Boss, the President of the USA, complete with super powers, right from the start. It’s relentless mission seems to be to add layer upon layer of craziness. Thankfully, Switch owners can now bear witness to the madness of Saints Row IV in all its glory.

The game cleverly drip feeds new powers as the story unfolds, battling against aliens to take back control of your old stomping grounds and saving the planet. Just as in the third game, weapons are equally over-the-top, too, from the inflato-ray that make people blow up like a balloon to the
Dubstep Gun that forces your enemy to dance until they drop, literally. It’s all designed to leave a big grin on your face as you play through the crazy story.

Learning from the initial mistakes of Saints Row 3 and its subsequent patches, the fourth game gets it right first time in terms of how it looks and feels. It’s immediately clear that the development team have put a lot of effort in to making this port run well on Switch hardware, both docked and handheld. There are moments when things get a little too much as the explosive physics take over the whole area, but these are few and far between, thankfully.

If there’s one area that still needs a tweak it’s the aiming. This is more down to the controls on the Switch than the game, perhaps, as the Switch Lite felt more accurate than the Joycons of the Switch and the Pro Controller is the recommended weapon of choice for this game. Aside from that Saints Row IV is a pretty solid port and contains all the previous DLC to boot.

Saints Row IV is great addition to the Switch library and a welcome one with hardly any other GTA-style games available. It never takes itself too seriously and provides a ton of fun in both handheld and TV mode. 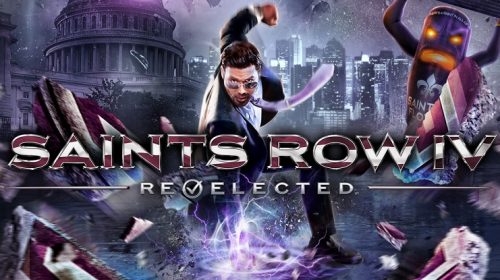