Time bending shooter Superhot VR finally comes to Quest in all it’s bullet time glory, this time with 360 degree action and no wires.

Superhot VR has been out a few years on other formats and it’s one of the go-to games for showing off what VR can do. The basic premise of the game is that you’re an agent training in a VR world where low polygon characters rush at you with fists and weapons to kill you. The twist is that time only moves when you do, giving you plenty of time to work out your next steps. Bullet coming towards you? Duck or bend, Neo-style, out of the way. Two enemies flanking you? Grab a cup and throw it at one while you grab his gun and shoot the other. Any action you take will, of course, mean the enemies can start to move again or that a stray bullet will get ever closer, so planning and a constant need to assess the area are needed.

While the VR game is great on other platforms, the Quest version adds a fully 360 degree arena for each level and much more of an immersed feeling within the game, thanks to its un-tethered nature. So much so that it took my brain a while to adjust once I’d taken my headset off (or maybe that’s just a sign of old age?). It’s one of those games that you really, really need to be careful to plan for before playing. Warn kids, loved ones and pets of their need to steer clear as you punch, grab and twist in the air around you.

Despite the slow motion aspect of the game, Superhot VR has plenty of motion involved and the latest version on Quest seems to have solved any early teething issues the game had with throwing items at enemies. You still need to be pretty accurate and with an idea of which way they’ll be running in order to hit them, but the Quest’s controllers do a great job of tracking your intentions.

The low poly white backgrounds and characters still manage to convey a sense of scenery and make each area look different enough to distinguish it from another, the art style has benefited the game since the original non-VR version released and it works even better virtually.

While the game could be breezed through in around an hour and a half if you know what you’re doing, many will find that it will take multiple replays of some levels to make it through alive and retries will often take you back to the beginning of a set of levels to play through them all again. New players are more likely looking at two to three hours for the main section of the game. I’d love to see DLC for this game, though, to extend the story further.

Extra modes do help to lengthen gameplay, especially the endless mode. The headshot mode is painfully difficult at times, though, but is good for those who are convinced they’re good enough to take it on as a challenge.

If you’re looking for something a bit different to showcase the Quest with or just to feel like Neo in the Matrix then Superhot VR is a perfect addition to your Quest’s library. 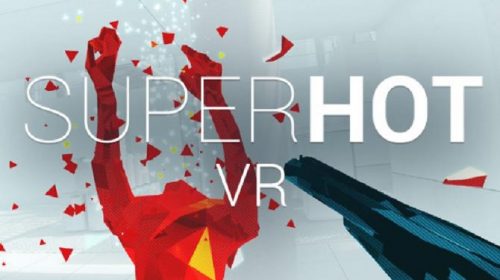 One Thought to “Review: Superhot VR”