Yes, it’s another game of the movie of the LEGO toy time and this time it’s the turn of the Ninjago franchise to get digitised for TT Games latest outing.  Ninjago was never high on my list of LEGO to collect, but I do like Ninjas and I also like the recent turn the LEGO movies have taken after the huge success of the 2014 LEGO movies, so I’m happy to take the latest block-buster (see what I did there?) for a spin.

The LEGO Ninjago Movie, recently out in cinemas, comes after the success of both the LEGO Movie and the LEGO Batman Movie.  The story involves our fledgling Ninjago heroes battling their arch enemy, Garmadon.  He’s an evil villain who has a penchant for all things shark and a plan to take over the city.  It’s as hyperactive as any Saturday morning kids TV and all the better for it as the game manages to use some of this high energy madness for its own ends. I’d argue that Ninjago is more niche, but it has a lot of fans and, besides, who doesn’t like Ninjas?

The game predictably follows the movie’s plotlines and has plenty of cut scenes taken directly from it, so prepare for spoilers if you’re playing this before watching the movie.  Also predictably, the game follows a very similar pattern to most of the other LEGO games over the last few generations; fight bad guys, solve simple puzzles and collect gold bricks and LEGO figures before reaching the end, then go back and sweep up the rest of the collectables. 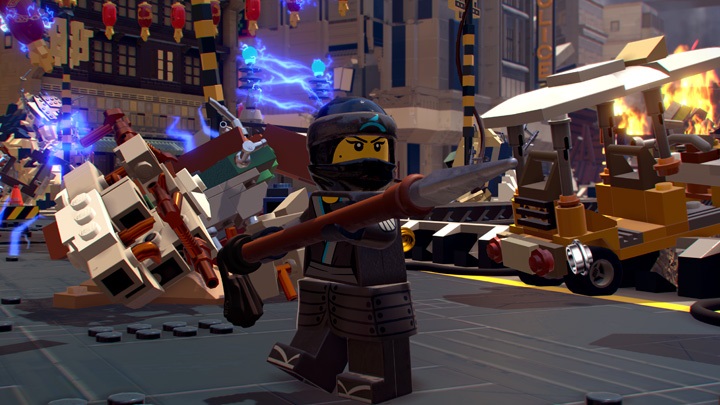 For the most part, this is something you’ve seen before if you’ve played any other LEGO game, but Ninjago does mix things up a little.  For one, there are powers which can be enhanced by collecting tokens.  These give you more moves, increase air time, power, coins collected from defeating enemies and more.  It’s an RPG-lite style levelling system that’s easy to understand but helps keep things fresh later on in the game.  This works alongside the main plot, where our heroes need to find their Spinjitzu power within themselves, opening up a special power to the player to do things like knock down glowing walls or hit targets.

As these are unlocked throughout the game, there’s some replay value to be found in going back to earlier levels and using the new-found power to unlock extra bits and pieces, but it’s technically a play on the existing ‘unlock a character who can set fire to things’ that LEGO games have been doing since the dawn of time.  it’s just nice to find a different way of unlocking this and makes sense in the story. 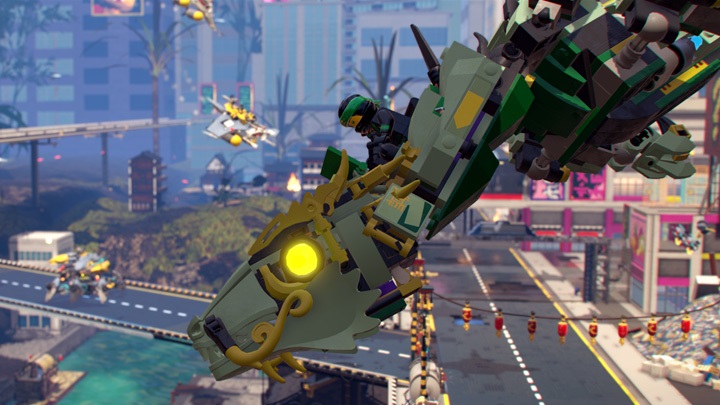 The game is also interspersed with sections where you get to take the Ninjago team’s vehicles for a ride, huge flying dragon ships and mechs, in an on-rails section which sees you fly through built up city streets, shooting at enemy planes, and boss battles which involve shooting targets or fighting the evil Garmadon himself.

There’s also a series of battle levels, obtained by opening Dojos in each world, which let you battle waves of enemies on screen, a sort of off-shoot to the LEGO Dimensions battle mode idea, and it works well, even if it is fairly lightweight.

The LEGO Ninjago Movie Video Game is another fun LEGO game that will delight Ninjago fans.  It doesn’t have a lot of original ideas, but the hyperactive nature of the franchise means this is one of the more frantic action LEGO games and it does try to mix the usual formula up a little at times and it’s a fun romp through the movie world. 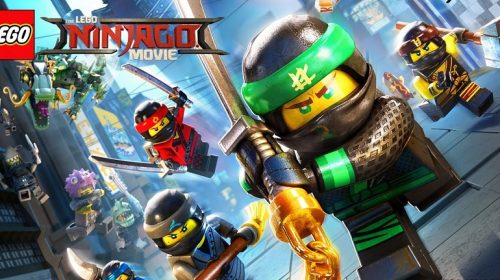