As many new Xbox One S owners are unwrapping their sparkly new consoles, it’s becoming clear that many will not be able to play games in HDR and 4K.

Options on the 4K settings section of the console state what your TV will be able to show and those without 10-bit Color depth (30 bits per pixel) are finding that the console won’t be able to play games in 4K or even certain video content. The wording on the settings menu is incorrect and that most TVs WILL be able to upscale games to 4K despite not having 10-bit colour depth.  What this does hint at, however, is that full 4K Gaming (which Microsoft have enabled developers to provide if they want to) won’t be possible without 10-bit Colour Depth.

HDR, though, will still require a 10-bit Colour Depth. Lookig out for ‘Ultra HD Premium’ on a new TV is one way to ensure a new 4K TV matches the spec you’ll need, but we’re finding that some TVs actually ’emulate’ this with an 8-bit Colour Depth and software, giving players less of an upgrade while still retaining compatibility.

To be fair to Microsoft, they’ve added a detailed description of what content can be played on their Xbox One S FAQ page.  The gaming element is shown below. 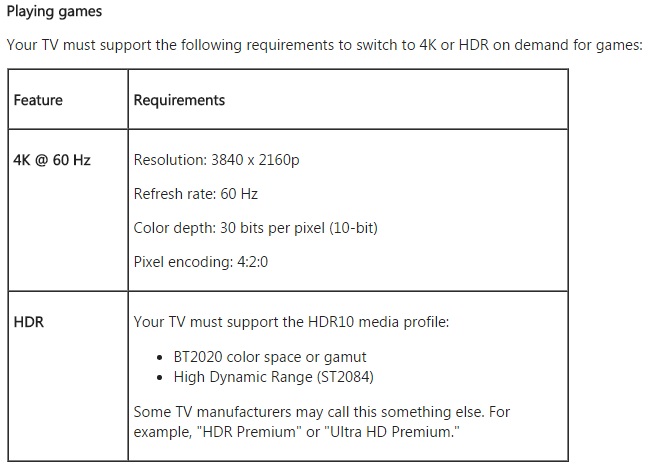 Many new 2016 HDR enabled TVs have 10-bit colour depth, but there are some TVs that featured 10-bit without HDR and a vast number that still only provide 8-bit colour depth.  It’s the latter TVs that cause the problem for would-be 4K gamers.

For TV viewing, Microsoft’s site simply states “specific 4K or HDR modes on demand” will not be available without 10-bit colour depth.