Coming off the back of the PS4 release of Earth Defence Force 4.1, the Vita EDF game feels a little paired back, but it loses none of the over-the-top fun in the process.

The series has a complicated past, originally appearing as Monster Attack and also known as Earth Defence Force, the sequels have been constantly renamed and re-mastered on different systems. This Vita game is the remake of the PS2’s Earth Defence Force 2, but it feels far more advanced than EDF 2017, despite being based on an earlier game.

As with other games in the series, the idea is simple; kill all enemies and try to survive to the end of the level without dying.  Picking up weapons and health dropped by said enemies is essential as new weapons and armour are provided at the end of the level based on the goodies you’ve managed to salvage.  You’ll certainly need some of the more heavy weapons by the time the giant robots and flying spaceships turn up as they attack in vast numbers and need a swift dispatch before they do the same to you. 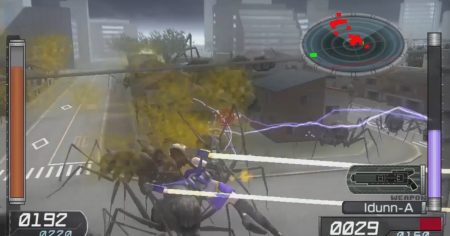 The key fundamentals of an EDF game are all here, too; I’ve mentioned the giant robots and the bugs, but the voice acting is well worth a mention as it comes straight from a B-movie sci-fi extravaganza, the sort you see in the bargain bin DVD basket, not to mention the story, which feels thrown together in the spur of the moment.  Don’t get me wrong, this is no bad thing and those who’ve played previous games will know exactly what they’re going to get here (and they’ll be grateful for it, too).

You’ll no doubt start off with the same basic foot soldier class that I did, it’s a staple of the game and the easiest to get to grips with. Pale Wings are the jet propelled air attack types who are light on armour but can use energy weapons and can escape the battlefield for a bit when things become over-crowded.  Finally, the Air Support gets to use all the lovely toys; tanks, helicoptors and other vehicles can certainly help in multiplayer, but you’ll struggle with them in single player.

There are 300 odd weapons and some huge enemies, like the Godzilla ripoff which shoots fire from its mouth. It’s all hilariously entertaining if you fancy splatting bugs on the train or fighting off giant robots on the toilet.  The graphics aren’t the best but on Vita’s screen they still look a lot better than the versions on other consoles.

If you’ve played an EDF game before then all you need to know is that this is one of the best and most entertaining games of the series. if you haven’t, you just need to decide whether you can cope with an underground nest of millions of giant ants while a fellow soldier screams for help in your ear, a huge grin on your face as you ride the number 2 bus into town.