The Switch is very indie friendly and top down twin-stick shooters tend to feature heavily in that list. It came from space and ate our brains joins that line up with its fun multiplayer shooter gameplay.

The premise of the game, as you might have guessed, is that aliens have come to take over the planet and, well, eat people’s brains and it’s your job to stop them.

Using voxel Roblox-style graphics, the clean looking visuals manage some great atmospheric lighting effects as you traverse streets, rooftops and other areas fighting off the aliens. It works surprisingly well with its dark corners and bright neon areas.

Gameplay is as simple as pointing a gun and shooting at whatever comes at you next but the waves of enemies are always well thought out and for all its basic gameplay elements, It Came From Space never gets boring. This is partly down to the guns you get given, each one providing a new sort of glee to your alien hunt and it’s also down to the need to pass a level to unlock the next, providing a much needed change of scenery.

There are quite a few difficulty levels to suit all tastes and a pretty robust 4 player co-op mode, too, which is far more fun than single player. Ultimately, though, the game relies on your love of twin-stick shooters and falls into the same trap as the rest of the genre of being a little repetitive after a while. The co-op does save it if you have friends to join the action but single player is still fun for those who want to get on and shoot things.

It came from space and ate our brains 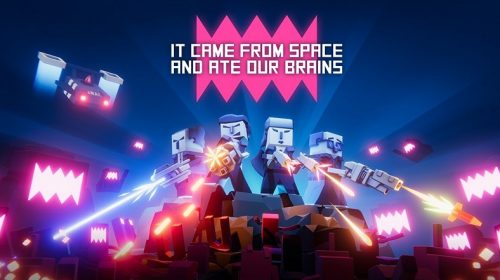