Water cooling is a nightmare, at least if you go down the route of ‘proper’ builds, but there is another option. NZXT have updated their famous Kraken closed loop coolers with a cool feature and some solid improvements.

First things first, the standout feature, from an aesthetic point-of-view, of the new Z series Kraken is the new display. Looking initially very similar to the X series, which features a set of varying colours and patterns, the new LCD display is capable of much more, both practically and for those who want to add a little artistic flair to their build.

The talking point of a build with this new device will most certainly be the function to add GIF images to the display. It stamps a unique mark on your build while providing a far more practical function of keeping the CPU icy cool.

But first we need to look at the cooler functions and if this really is worth your hard earned money in terms of its main function. Thankfully, the unit is really easy to install, though it’s worth noting that the dimensions of the Z73 are rather large, considering it has a 360mm radiator and 3
120 x 25mm fans and need a substantial amount of space in the front or top of the case to fit.

The installation is straightforward and involves includes placing a backplate for mounting the cooler on your motherboard (Intel and AMD types are both included), placing the unit on your CPU with the thermal paste already included, so no need to get the spatula out, then connecting the fans and radiator to your case before plugging everything in to the power, fan controller and USB of your motherboard.

Of course, in reality this could be complicated by your case, motherboard and all the other usual pitfalls of PC building, but in practice this took 15-20 minutes to install on my build and I took my time.

While the 360mm radiator in the Z73 may seem imposing, there is a Z63 option which offers a slightly slimmer package for a slightly lower price point in order to fit smaller builds. Both do pretty much the same job, give or take a few degrees of cooling. Both fit somewhere in the middle between traditional air coolers and custom loop water coolers and that’s as true of the results as it is of the price and ease of installation.

Using a front installation on an i5 processor, results are impressive, with the Kraken Z73 managing a 26-27C degree average temperature at idol and a maximum of 49C during stress tests on video and gaming. The most I have managed to get it to is 51C for a few seconds, which beats previous coolers I’ve tried by a fair amount.

Even at those higher temperatures the fans remained fairly quiet though at max speed they certainly jump to around the 40 dBA mark. It helped having a shielded case (the H440, which I highly recommend) so I opened the side panel to get a more accurate idea of the noise and was surprised to find that there was very little to speak of, measuring at 42dBA on the highest speed with all the other fans in the case also working away.

On lower fan speeds the noise reduces significantly and the whole case, including the fans on the Kraken reached just 25dBa. With the side panel closed it was barely audible.

Monitoring temperatures, fixing the display to presets or your own custom colours and GIFs and other features are all done through the latest version of NZXT’s CAM software. The new update (which you’ll need to install to recognise these new coolers) seems to be a much more stable build and offers more in the way of management for both fan speeds and cooling, with temperature warnings and even colours that match the CPU temperatures. It’s pretty intuitive and provides many presets where you can play around with the colours and output, though the one thing I would have liked was the option to overlay the temperature on the GIFs, as it seems you can only have one or the other at the moment.

The benefits of this higher priced cooling are, therefore, twofold; you get a very good and efficient CPU cooler and you also get a great way to properly customise your case and stamp your own unique mark on it. While the price is almost in to the realms of custom watercooling, the easy installation and results show that the new Kraken Z73 hits the sweet spot between the two. 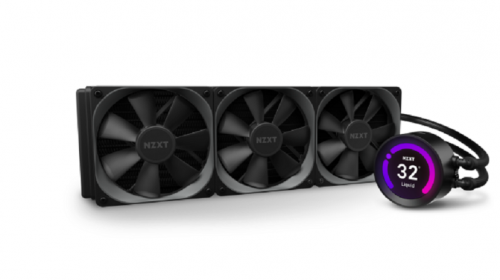