Czech manufacturer QPad has been expanding its PC peripheral range for a while now. Alongside the impressive DX80 FPS Gaming Mouse they’ve launched the affordable but fully featured MK-40 Gaming keyboard.

The MK40 is an interesting product as it sits somewhere in between the traditional membrane office keyboards and the more modern and far better mechanical ones. The key word here is ‘ Membranical’ and while that may sound more like a Superman villain, what it means is that they’ve combined the technology of Membrane and Mechanical to get something that sits very firmly in the middle of the two, providing a 30% shorter keystroke but without the ‘click clack’ and the price of full Mechanical.

The keyboard arrives with a separate wrist rest that needs to be screwed in to place. It’s a little fiddly with the tiny screws included and the rest is quite a basic slab of plastic but it’s still good to have the option. Aside from this the keyboard itself is well made with good key height and a small gap under the keys where the lighting can shine through.

Lighting is more subtle than I was expecting, there are 3 levels of brightness over the several colours, all accessed with a Fn key command, but none of these really get what I’d call bright. The lighting also shows through on the key tops to highlight the letters which looks nice in a darker environment.

As expected, reactions to the keypresses are far better than a membrane keyboard, keys felt like they responded well, though not quite as much as on a mechanical keyboard, but that’s in line with the technology on offer here. There is a definite advantage if you need a gaming keyboard on a budget but can’t stretch to the hundreds needed for a mechanical model.

All of this adds up to make the QPAD MK40 a decent choice at the budget end of the gaming keyboard market. It’s not going to compete against the big mechanical keyboards if you’re really serious about your gaming but for everyone else looking for a good looking and nice feeling keyboard for gaming on a budget it’s a solid choice. 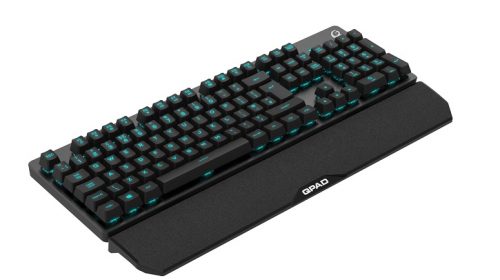