Being a long term Transformers fan, I’m picky about the lore in a overly geeky way and I admit that the Michael Bay movies ruffled a few feathers where this was concerned.

The All-Spark was an obvious trade-off for the Matrix of Leadership and got even more complicated when the Matrix itself appeared in later movies.

So Rise of the Dark Spark doesn’t do me any favours, with the ‘Dark Spark’ adding an even more convoluted element to the power sources that control the mechanical beings. 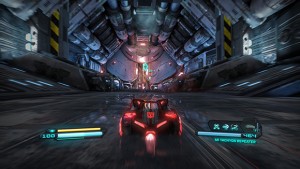 This Dark Spark gives the bearer the power to manipulate time and space, as well as to create zombiefied robots out of enemies.  It’s no Wonder Optimus Prime wants to remove it from prying hands of those who would use it for evil. Yes, Megatron, I’m talking about you.  But this is a movie tie-in with the latest and fourth film in the franchise, so the whole Megatron saga is all in flashback form and the main villain of the piece is Lockdown (who just happens to the the main new Transformer in the latest movie).  Overall, though, you’ll just want to forget the convoluted story which desperately tries, and fails, to meld the two universes together.

The ultimate sin, though, is a post credits scene that will leave any old time fans wondering if the developer was playing some sick joke on them for the last few hours and is now just taunting them.  At best it’s a confusing addition to an already confusing story.

Bad storyline aside, the action should be fairly good if you’re working on a game engine and premise already successfully set up by another studio, right?  I only wish that were true.  Developer Edge of Reality seemed to have phoned this one in.  It’s simply corridor after corridor, with only a few sparks of originality where grappling hooks come in.

Yes, the robots transform, and have to for levels where flight is essential, but it always feels a bit forced and the vehicle modes are often an afterthought rather than a cool feature.

On the PS4 the environments are given very little time to shine, with mostly bland corridors 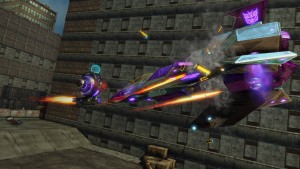 and un-inspiring outdoor scenes making up most of the game world.  Occasional glimpses of greatness only serve to remind me that it’s no step up from the last two Cybertron games, even on new hardware.   While the game world isn’t awful, per se, the layouts have a rushed feeling about them.  Only the multiplayer mode’s maps seem to have had some thought go into their creation and even then they feel somewhat generic.

Escalation Mode is the only other gameplay option on offer here, no co-op or other multiplayer modes.  It’s a return to the ‘Horde’ style gameplay with waves of enemies that get stronger as you progress.  Stations dotted around the map let you build gun towers, medical areas and various weapons for a short time, the trade off being that you need to spend credits to afford them.  It’s a nice idea that works well on some maps and not so well on others.  Again, though, for a game about transforming robots, the vehicle modes are very seldom required. 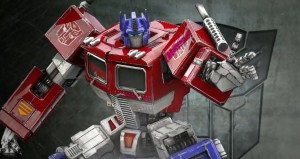 Transformers games have usually gone either way based on their source; the movie games aren’t great but those based on the original comics or cartoons are far better. This new game is based both on the movies and the comics or, at least, the previous comic-based games. So I guess the overall question is this; which side of the fence does Rise of the Dark Spark fall on?  Is it a bad movie game or a good original game?  As you may have already guessed, just like the game’s hodge-podge of movie tie-in and High Moon-based titles, it sits somewhere in between.

Even as a hardcore Transformers fan, this feels like a chore at times and there’s a feeling as the credits roll that it could have been much better.